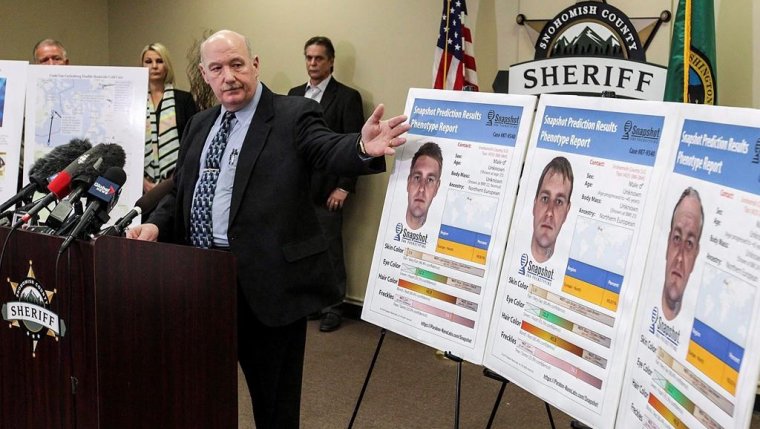 VICTORIA — As the years stretched into decades with no arrests after his sister’s body was found in Washington state, it was becoming hard for John Van Cuylenborg of Victoria, B.C., to maintain hope for any justice or answers.

Then he received a phone call about investigators getting a break in the cold case.

It involved a controversial new investigative technique that American police have been using to comb through the genetic family trees of potential suspects in such unsolved crimes.

The technique is raising questions about privacy of a person’s DNA on both sides of the border.

"It was surreal, really, after 31 years to get that phone call," Van Cuylenborg said. "It was very gratifying for all of us who have held out hope for that long that something would come of it, but without the technology, I don’t think it would have happened."

Police in Snohomish County, Wash., announced the arrest of William Earl Talbott in May and have charged him with first−degree murder in the death of Tanya Van Cuylenborg, who was 18 in November 1987. The body of her boyfriend Jay Cook, 20, was found about an hour’s drive away.

Detectives said they uploaded a DNA sample from the crime scene to an open−source genealogy database called GEDmatch. After identifying genetic relatives, investigators built a family tree that led to Talbott as a suspect. Police then collected a fresh DNA sample from a discarded cup. It was a match.

The charge against Talbott has not been proven in court.

While the arrest has brought some sense of closure to John Van Cuylenborg, the new investigative strategy has prompted debate in Canada about privacy rights.

"The fact of one story or a handful of stories seemingly going in a positive way doesn’t take away our concern for the potential of misuse for these kinds of tools," he said.

Even in cases where a website warns users that their genetic information may be shared with police, Paterson said, it means someone’s third cousin may be consenting on their behalf.

In Canada, there are strict rules for good reason around the use of genetic information in the National DNA Data Bank, which limits samples to individuals convicted of certain crimes and regulates their use by police, he said.

In contrast, he said American detectives appear to be fishing for suspects through genealogy sites that store genetic information.

"They’re basically throwing a net in the sea and asking these companies what they might come back with," he said.

On the other hand, Eike−Henner Kluge, a professor of philosophy at the University of Victoria with an interest in biomedical and information ethics, said there are cases where privacy rights can be breached if there’s a threat of harm to others, and unsolved murders may be one of them.

"Any right is subject to the equal and competing rights of others," Kluge said in an email. "This is also recognized in the classic legal statement, ’Your right to swing your arms ends just where the other man’s nose begins.’ "

"It’s something I declined to do for a very long time. I was concerned about informed consent, about people in the genetic genealogy databases having their DNA used for a purpose they had not consented to and were not aware was a possibility," Moore said, adding it took her only eight hours to identify a suspect.

April and GEDmatch changed its terms of service to alert people to possible police involvement, Moore said she feels more comfortable with the idea that people are informed.

She also said while she can help police identify suspects, their DNA must still be tested against samples from the crime scene in the traditional way.

"What I’m doing is only a hint or clue pointing them in the right direction. It’s not evidence they could use for an arrest," Moore said.

The Office of the Privacy Commissioner of Canada said direct−to−consumer genetic testing companies are subject to federal and provincial private−sector privacy laws, if they are based in the country or have a real and substantial link to Canada and are engaged in commercial activities.

Generally speaking, Canadian police would have lawful authority to pursue an action such as trying to identify suspects with DNA information held by private companies under those laws, the office said.

It also noted, however, that the DNA Identification Act, which introduced the National DNA Data Bank in 1998, does not allow for familial searching.

"Our view is that DNA constitutes highly sensitive personal information. While DNA profiles can help solve cold cases ... and bring emotional closure to victims and families, their collection and retention must respect the highest possible standards of fair balance between security and privacy," it said in an emailed statement.

"As direct−to−consumers genetic tests become increasingly available, particularly over the Internet, it is important to understand their privacy risks."