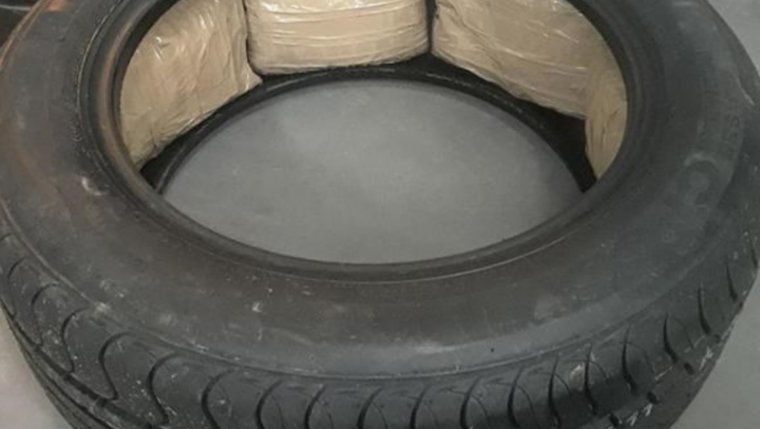 A notorious Mexican cartel stashed bricks of methamphetamine in the spare tires of new cars before sending the vehicles to Canada by rail in a sprawling drug smuggling operation, authorities alleged Wednesday.

Ontario Provincial Police said they found 180 kilograms of meth during their investigation, which began when employees at four different Ford dealerships reported suspicious bags inside tires that were in the trunks of new Fusion cars.

Police said the cars were built at Ford’s assembly plant in Hermosillo, Mexico, before being put on northbound trains.

"The powerful Sinaloa cartel is well entrenched in that area of Mexico," said OPP Supt. Bryan MacKillop. "We are very certain that they are ultimately responsible for these drugs."

He said authorities first became aware of the drugs in December when Ford dealership employees in four Ontario communities — Chelmsford, Collingwood, Bolton and Newmarket — called police about the beige−taped packages that lined the tires.

Other cars that were part of the same shipment made their way to Quebec and New Brunswick, MacKillop said.

"We were able to proactively stop a similar subsequent shipment of cars as it crossed the border into Canada," he said. In that case, police found meth hidden in a similar fashion in 12 of 14 vehicles they searched.

Authorities have continued to search vehicles coming into the country from Mexico, but have yet to find more drugs, MacKillop said.

"That tells us that this method of smuggling has been successfully disrupted," he said.

Police said they haven’t laid charges and are still investigating. MacKillop said investigators believe the "logistics" of the alleged smuggling operation failed, which led to the drugs continuing on to dealerships.

"I don’t think that’s what they wanted," MacKillop said.

He also said police don’t know when or where the cars were "exploited," other than saying those responsible were the Sinaloa cartel, which was once led by drug lord Joaquin "El Chapo" Guzman, who was found guilty recently of drug trafficking and murder conspiracy charges in New York.

Police noted the "creative means" to smuggle drugs into the country.

"As we know from past drug smuggling investigations it is not uncommon for a criminal organization to resort to creative means to hide illicit drugs within legal cargo," MacKillop said.

"The use of methamphetamine is on the rise," Barnum said. "The number of meth seizures has continued to grow since 2010."