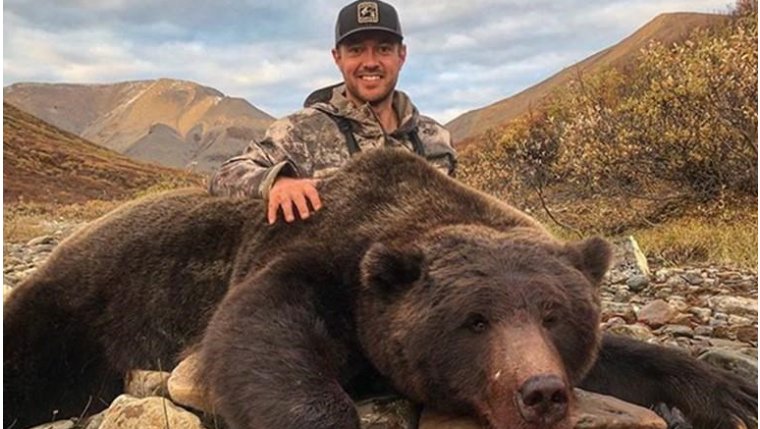 A former professional hockey player is facing a backlash after he posted photos of a massive dead grizzly bear he hunted in Yukon.

Tim Brent, who was born in Ontario and played for several teams in the NHL, shared the photos on Facebook and Twitter.

"So this is the Mountain Grizzly Bear!" he said in a Sept. 10 post. "It was very easy to tell by his posturing that this boar owned the valley we were hunting and wasn’t scared of anything!

"My heart felt like it was pounding out of my chest, but the 30 Nosler did the job and stopped him in his tracks. Couldn’t be more thrilled to take a world−class mountain grizzly in one of the most beautiful settings in the world!!!"

In another post a couple days later, Brent posted a photo of himself with a moose he killed.

"The stars definitely aligned in the Yukon when I spotted this giant bull in the willows," he wrote. "I am thankful and I will never forget this moment in time, with family, in the most beautiful place on earth. This is a moose of a lifetime!!!"

The posts of him posing with the dead animals have sparked criticism and threats from other social media users — including one suggesting they should get a Mexican cartel to "put a hit" on him and see how he felt.

"This is what we are up against as hunters and conservationists!" he wrote last Friday. "These are the types of messages I am getting on Twitter in response to my moose and bear hunts. I would love to know what constitutes a threat or abuse for Twitter?"

Brent has not responded to a request for comment.

Officials with the Yukon government didn’t respond to questions about the outrage, but confirmed the fall hunting season for grizzlies runs from Aug 1. to Nov. 15. They say it’s legal to shoot moose from Aug. 1 to Oct. 31.

In the emailed statement, they said a non−resident Canadian hunter would need to use an outfitter or a special guide to hunt for a black bear, grizzly bear or moose in Yukon.

Earlier this year, outdoor television host Steve Ecklund’s cougar hunt in Alberta led to a similar controversy — prompting Laureen Harper, wife of former prime minister Stephen Harper, to suggest Ecklund had a small penis — after he bragged about it on social media.

Similar outrage followed the killing of No. 148, a well−known Banff grizzly bear, by a hunter in British Columbia last summer.

Both kills were legal, but prompted a debate about the cultural divide that exists about hunting large carnivores.

Hunters often defend the hunt as tradition and a way to put food on the table, while others say predator meat isn’t very tasty so they are often killed for their trophy items.