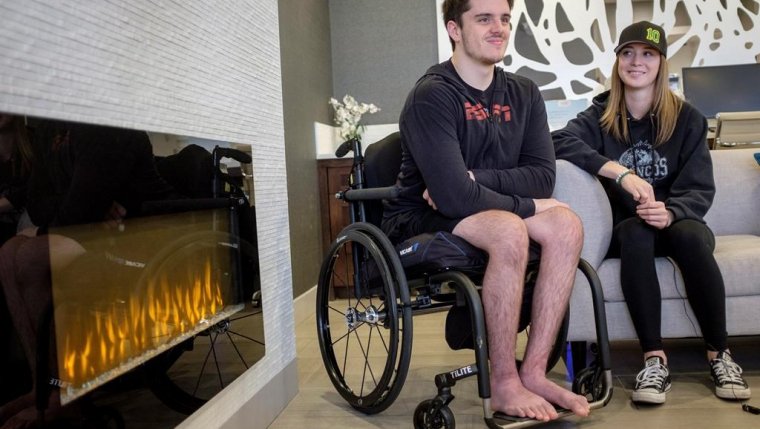 AIRDRIE, Alta. — Erika Burns knew something was wrong the day that a bus carrying the Humboldt Broncos collided with a semi−trailer in rural Saskatchewan.

The 20−year−old had been dating Ryan Straschnitzki for about a month and had been texting him on his way to the playoff game in Nipawin, Sask., on April 6.

"He didn’t say bye or anything and I was wondering because it was getting kind of close to the time he starts getting ready and I wasn’t getting anything back," Burns said.

"I was in a car with a couple of the other girlfriends on the team and they weren’t getting anything either so we were kind of wondering. Not long after that we got a call from one of the moms saying the bus was in an accident."

At the time, Burns and her friends thought it was a fender bender. They then learned how serious it was — 16 people had died and 13 others, including Straschnitzki, were injured.

"Honestly, I didn’t really have much thought. I kind of just panicked and instantly started crying ... Everybody in the car was. We really didn’t know what to think."

Straschnitzki, who is 19, was paralyzed from the chest down. Now he’s focused on physiotherapy and his dream of playing on the national sledge hockey team. He asked Burns to move in with him and his family at the Wingate Hotel, dubbed the "Strazgate," in his hometown of Airdrie north of Calgary.

Six months later, Burns is taking a business course at Bow Valley College in Calgary and has been Straschnitzki’s constant companion — including during a recent trip to a sports awards ceremony in Ottawa and a day spent touring Parliament Hill with Prime Minister Justin Trudeau.

Despite the changes, she says he’s still the same guy she was set up with last March.

"It’s different but it’s easy enough. He kind of gets frustrated when I have to help him with stuff. He doesn’t feel like he should be needing that help but I always reassure him it’s not a problem," Burns said.

"The best part is just being close to him, seeing him every day."

Straschnitzki’s life has been a whirlwind the past six months and he realizes he needs somebody to help him.

"I mean obviously I need some people to rely on at some points but, for the most part, I’m becoming more independent, getting stronger and playing sledge hockey."

Canadian wheelchair athlete Rick Hansen was one the first people to visit Straschnitzki while he was in hospital in Calgary. Hansen told him there’s more to a person than their legs and encouraged him to keep pushing through.

"I almost kind of want to take the torch from Rick Hansen and do something that inspires people to never give up and go through that other door — not the one that closed on you," said Straschnitzki.

"Obviously it’s a long−term goal and it’s going to take almost the rest of my life but I’m willing to do it."

Straschnitzki has been approached about public speaking and to be part of a new reality show similar to "Pimp My Ride" where a vehicle can be modified for his specific needs.

It’s part of a new normal for Straschnitzki.

"It’s a whirlwind. I know I’m not used to that kind of stuff but I’m starting to get used to things and learning how to handle myself."