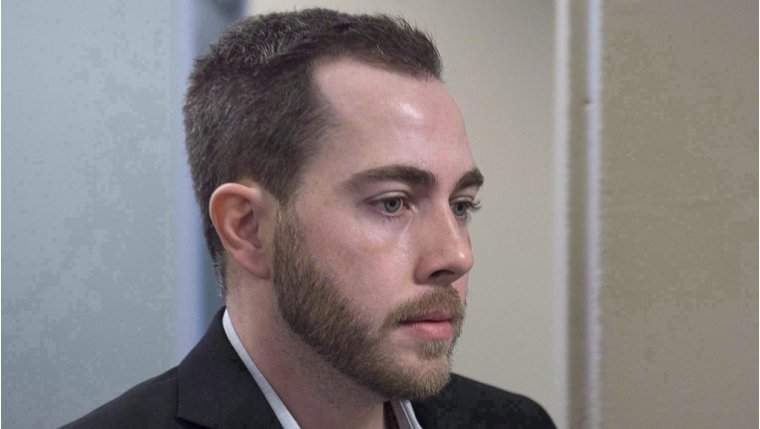 HALIFAX — Political outrage is building over Veterans Affairs Canada’s decision to pay for the PTSD treatment of a Halifax man who murdered an off−duty police officer and used a compost bin to dispose of her body.

He called on Veterans Affairs Minister Seamus O’Regan to "please step in now and address this outrage," while another Conservative MP, Erin O’Toole, called the department’s help for Christopher Garnier an "outrage of the highest order."

O’Regan said in a statement late Wednesday he would be "looking into how and why this decision was made," but defended Veterans Affairs and its PTSD treatment for vets and their families.

"While I completely understand people’s frustration with this story, these supports for family members are not new — they’ve been in place for many years," he said.

Garnier was convicted in December of second−degree murder and interfering with a dead body in the September 2015 death of 36−year−old Catherine Campbell, an off−duty Truro police officer.

At a court hearing this month, Crown lawyer Christine Driscoll confirmed Garnier is being seen by a private psychologist, and that Veterans Affairs is covering the cost because his father is a veteran who has also been diagnosed with post−traumatic stress disorder.

McColeman said while he can only speculate about what went into the decision, he wonders want kind of scrutiny was applied in this case.

"I want him (O’Regan) to intervene," said McColeman.

"In many cases that I’ve dealt with representing veterans from my own riding over the years, there’s discretion that’s often used at the upper management levels of Veterans Affairs," he said. "Whatever happened I think the minister owes us an explanation."

In a statement Tuesday, Veterans Affairs confirmed relatives of veterans are eligible to apply for PTSD treatment. The department also said counselling and other services can be offered to relatives when it is determined such a move will help veterans achieve their rehabilitation goals.

But McColeman said there are programs available within the federal penal system, which he said should be dealing with Garnier’s case.

"The majority of them deal with mental health issues and PTSD is one of them."

McColeman’s point was reiterated in Nova Scotia, where the interim leader of the provincial Tories also issued a statement saying she’s "outraged" by the federal department’s decision to help Garnier.

Karla MacFarlane called it a "slap in the face" to veterans who have served the country and who often have to fight to access the services they need.

"This is PTSD that they are claiming that is derived solely because of murdering an individual, so it’s just a jagged pill to swallow — it’s not right," she said. "Christopher Garnier may receive help while he is in jail but it should be from the Department of Justice. There shouldn’t be a dime spent by Veterans Affairs."

In his statement Wednesday, O’Regan said 96 per cent of applications to the department for PTSD treatment are approved, and veterans with immediate mental health issues get help in the meantime. He said the department is focused on "increasing awareness among veterans, and their families who serve alongside them, so they know that these services exist."

Earlier this month, a Nova Scotia Supreme Court judge decided Garnier would be able to apply for parole after serving 13.5 years of a life sentence — less 699 days for time served.

Garnier’s lawyer has argued his client’s mental illness was brought on by the murder. In court submissions, Joel Pink said a psychiatrist hired by the defence said in a report that Garnier suffered from acute stress disorder immediately following Campbell’s death.

Colin Saunders, an Ottawa−based veterans advocate, said he was disappointed by the federal department’s decision.

The retired artillery sergeant, who organized a Parliament Hill protest over veterans’ benefits earlier this year, said the extension of benefits to family members is a good thing that contributes to the overall well being of veterans.

"I think that this case with this murder is the exception to the rule," said Saunders. "It’s very rare that someone convicted of murder would ever reach out to Veterans Affairs especially when they are not vets themselves."

Saunders said as a consequence, he doesn’t believe Garnier has a right to any help from the department.

Asked for its reaction Wednesday, the Royal Canadian Legion sent an emailed statement.

"Without the full details of this person’s past, and not knowing why PTSD benefits would have been extended, it is difficult to make a judgment or assessment of the decision made by Veterans Affairs Canada. Understanding there is case confidentiality, we do expect VAC to provide some information to help explain this situation."