Neeginan Centre A Catalyst For Change 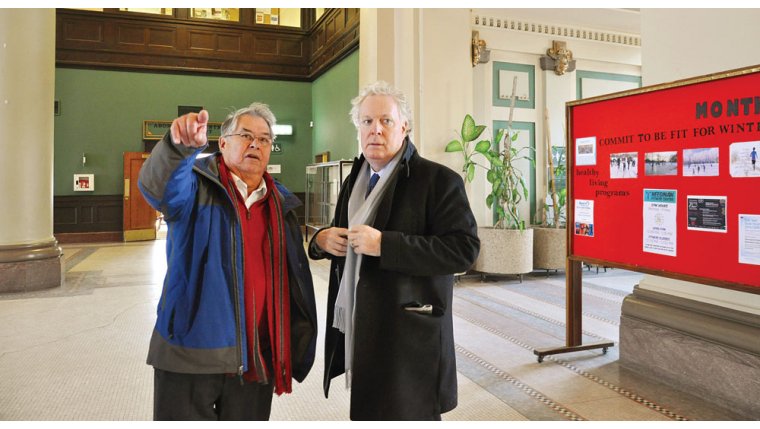 WINNIPEG, MB - The corner of Higgins and Main once had the worst reputation in Winnipeg. It was the centre of seedy bars and prostitutes, a place where only the uncaring or desperate would go at night. That was 25 years ago.

Now all that has changed: the bars are gone and new construction has put a bright face on the corner. The catalyst for that change over the past 25 years has been the Aboriginal Centre of Winnipeg Inc., now Neeginan Centre of Winnipeg, along with a collection of agencies that reside in the massive building that used to be the railway station and offices of the Canadian Pacific Railway.

The story of that change is one of courage and conviction, of entrepreneurial spirit laced with a social mission. And it is the remarkable story of a handful of aboriginal people who decided to take control and make change happen for their people in the inner city of Winnipeg.

Back in the late 1800s, the coming of the railroad to Manitoba was a game changer for everyone living here, most particularly for the First Nations, who were crowded out of their traditional lands to make room for an influx of European settlers. Many of these settlers came through the CPR station and its adjacent immigration sheds.

This massive four-storey, 120,000- square-foot office building, with an elegant hotel attached next door, was built as a monument to the power of the railroad in 1904 to 1905. It was vacated in 1989, a decade after passenger traffic through the station had ceased and the offices were moved out of province.

In 1989, newly minted Mamawiwichiitata executive director Wayne Helgason learned the CP Station was for sale. According to the press, “not even any Aboriginal groups” were interested in it. Mamawiwichiitata was then the largest organization serving off-reserve Aboriginal people in Winnipeg. Stuck in an expensive and inadequate second floor walk-up on Notre Dame at a cost of $141,000 a year, Wayne said Mamawiwichiitata was looking for about 12,000 square feet in a centrally located building. As the knowledge that no Aboriginal group actually owned any real estate in the city sank in, an idea began to germinate in Wayne’s fertile mind. What if his group could find a way to buy the property and develop an equity base by renting to other agencies?

Alongside fellow board members, Sandi Funk and Don Wilson, Wayne went into action. They contacted local realtor, Joe Diner, who became enthused by the idea and introduced Wayne’s group to Charlie Pike, then vice president of CP Rail. Charlie thought that nothing could be more fitting than for the local Aboriginal community to buy the station; it would symbolize the return of this vital population to the mainstream and perhaps pave the way for better things to come.

Charlie suggested they contact Dorothy Dobbie (the only sitting government MP for Winnipeg at the time). She and Charlie had discussed the matter some years earlier and Dorothy, eager to help, started shopping the idea around Ottawa.

This all sounds so cut and dried but nothing is ever as simple as it appears. Wayne and his group faced seemingly insurmountable hurdles, yet they brushed them aside and charged ahead.

One example of this is recounted by Wayne in speaking about how they secured the offer to purchase. “We actually had no cash,” Wayne said. “We were armed only with board motions from five Aboriginal organizations, each committing $10,000 for the purpose of a refundable deposit for an offer to purchase.”

He went on. “I took the five motions to the Median Credit Union, who converted them into a cheque for $50,000 which accompanied our offer which was to be presented to CP in April of 1992.”

In spite of the many challenges and setbacks, serendipity took over. The best news came when Heritage Minister Jean Charest offered support from his department, believing it would be an investment in the future of Winnipeg’s Aboriginal youth (Jean was the former minister of youth) as well as in the preservation of a heritage building. He came up with $500,000, of which $300,000 was designated for building restoration. The other $200,000 triggered provincial and civic grants toward the purchase price of $1.1 million. This injection allowed the group to take possession of the building in 1992. Some of the smaller tenants moved in almost immediately, generating much needed cash flow.

The rest is history, but a history that too few realize has become a major success story for the community and a tremendous support for local Aboriginal people. Even fewer understand the commitment and effort the local aboriginal community invested in the project, or how their entrepreneurial spirit and dogged determination brought this to life.

An early contributor to the success was the secondment of Bill Shead, a senior aboriginal civil servant and Prairie regional director general of Veterans Affairs Canada, to serve as the Centre’s first executive director. Bill filled the post from 1993 to 1996, providing guidance through those first critical years and even spearheading an important fundraiser which brought together many of the city’s most prominent citizens to work with the Aboriginal community. The committee raised $60,000 towards the continued restoration of the rotunda and other parts of the building in disrepair. The event was a symbolic coming together of communities that would stimulate further interest, donations and development. And, that was just the beginning.

Another key factor in the ongoing success of the enterprise was the hiring of the diminutive, but mighty, Marileen Bartlett, a driving force behind the management of the Centre; and Damon Johnson, who brought his 20 years of organizational and widely based management skills with him from the City of Winnipeg. These Aboriginal professionals took the Centre to its next level and beyond.

Although the community took possession of the building in 1992, it was another four years for the ACWI to convince governments to assist in areas like funding to bring the building up to current civic codes (a $4 million slice on its own). It wasn’t until 1996 that the official opening took place, with Lloyd Axworthy at the ribbon cutting. During this period, “volunteer labour from unemployed Aboriginal workers began the renovations work,” said Wayne Helgason.

That understates the case. Their work, painting, repairing, building and restoring the property, reduced the renovation costs by over a million dollars.

Today, most of the Centre’s revenue comes from the rental of office space and parking as well as the odd windfall through rental of the rotunda (scenes from the movie One Last Dance were shot there).

Over the past 24 years, Neeginan Centre of Winnipeg (Our Place) — the new face of ACWI — as it is now legally known, has leveraged the initial investment into a multi-million dollar complex. They have mortgaged and remortgaged the original property to raise the funds needed to get each of their projects going. These include a learning centre and Neeginan College, a housing development complete with daycare, a health and wellness centre, the ownership of a nice swathe of adjacent land, and a recycling business (Mother Earth Recycling). As a spinoff benefit, additional investment has resulted in a complete remake of the once unseemly civic corner.

They have upgraded, retrained and graduated thousands of young adults who had fallen between the cracks but are now actively employed in such work as high tech aerospace jobs, nursing, welding and a long list of other endeavours. The retention rate of these young people is about the same as any other age-related cohort. Neeginan meets the specific needs of their students by dealing with the realities of today’s life, hence the daycare.

Recently they added a gardening course to the curriculum and were given global recognition for successfully raising some traditional squash from 800-year-old seeds.

The centre is run by an elected board of directors representing the tenants who form part of a co-operative ownership. Bill Shead is now the chairman of the board for the centre.

Marileen Bartlett is the general manager of the building and the executive director of the centre’s largest tenant, the Centre for Aboriginal Human Resources Development (CAHRD), which operates the schools. Her contribution cannot be understated; she works extraordinarily long hours holding down two critical jobs and making them work.

Damon Johnson is president of the Aboriginal Council of Winnipeg Inc., which still retains part ownership through its tenancy. Damon continues to represent the centre on many fronts as a board member and chair of several other important local and national organizations.

Wayne Helgason is also still involved, although he has retired to Vancouver after serving as executive director for the Social Planning Council of Winnipeg for 16 years. He has recently become special advisor to federal employment minister MaryAnn Mihychuk with the title of director of special projects, employment and social development Canada.

In spite of all their successes, there are still challenges to be met. Chief among them is their desire to have their school become certified under Manitoba’s educational regulations. This would put Neeginan on a fairer funding ground with other educational institutes, allowing more advances.

Not surprisingly, this indomitable group has plans for additional development. Stay tuned, because it will happen.

Photos from The Hub