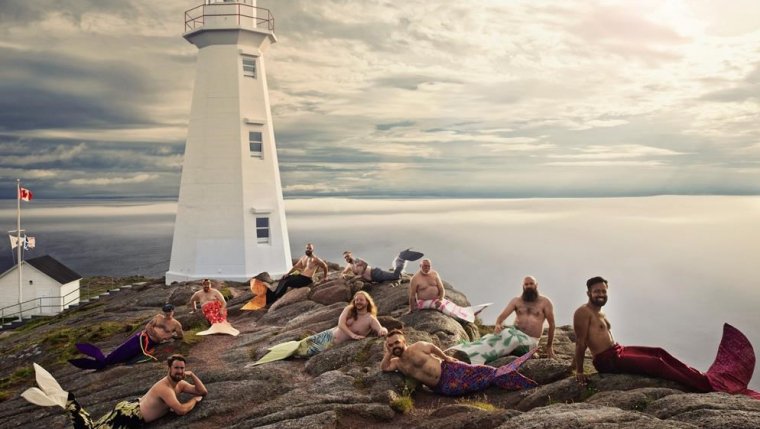 ST. JOHN’S, N.L. — What started as a dare for a burly Newfoundland man to pose in mermaid flippers has turned into a globally known effort to combat gender stereotypes — and raised more than a half million dollars for charity.

This past weekend, the Newfoundland and Labrador Beard and Moustache Club gave a cheque for more than $202,000 to Violence Prevention NL.

That’s the proceeds from the 2019 Merb’ys calendar, which draws its name from ’mermaid’ and the Newfoundland moniker for ’buddy.’

The calendar features photos of husky, bearded Newfoundland men posed on the province’s rugged shoreline — wearing just their merman fins and their smiles.

Hasan Hai, the leader of the club, said it all started with a dare in 2017.

"A friend of mine on Facebook had shared a picture of a big bearded fellow dressed as a mermaid. I was kind of known in my friends’ circle as a guy who didn’t shy away from dares or doing fun things that would further community projects and goals," he said.

"Initially the idea was to maybe get a bunch of people together and maybe take a bunch of pictures poking holes at traditional gender stereotypes and what a ’real man’ was supposed to look like."

A month later, they had the 2018 version of the calendar and a demand from around the world that raised more than $300,000 for a local mental health organization.

Hai said they decided to do it again for 2019 and put the call out to charitable organizations, and about 40 applied.

He said they decided to go with Violence Prevention Newfoundland and Labrador because its mandate is much the same as the club in fighting gender stereotypes and "toxic masculinity," and showing men there’s a healthier way to live their life moving forward.

"Their project was deconstructing masculinity and engaging men in violence prevention, and it kind of checked all the boxes for us. It’s not criticizing men for being men, but breaking down those harmful bits of it and building up the positive ones," he said.

Hai said Violence Prevention NL will develop programming in communities and also get it translated into the various Indigenous languages found across the province.

But he said with the calendar being sold in 37 countries around the world, the message is reaching many more people.

"The main theme, even without reading the back and understanding the charity we’re supporting, is that people see men being displayed in these positive ways — body positivity, men showing affection and emotion, and just having fun. Emotionally I think people connect with it, and even without telling them what the message is, they get it," he said.

Hai isn’t sure there will be a 2020 version of the calendar. He said the first two calendars have taken 15 months of work and everyone needs a rest.

However, he said that doesn’t mean they are hanging up their fins for good.

— By Kevin Bissett in Fredericton.