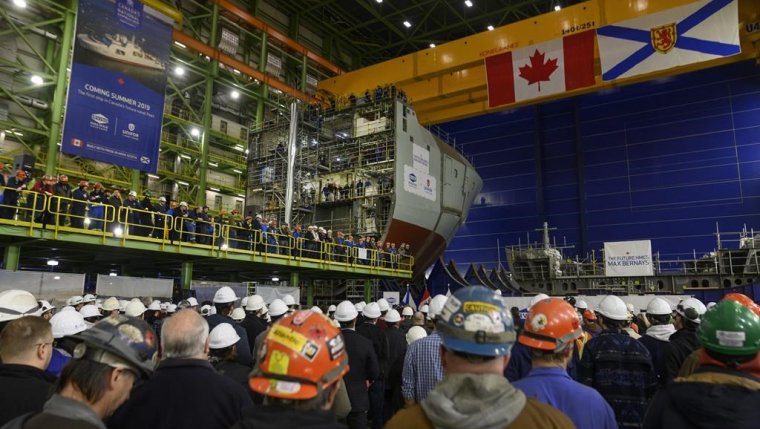 HALIFAX — The federal government awarded U.S. defence giant Lockheed Martin a long−awaited contract to design its $60−billion fleet of warships despite lingering questions about the selection process and a legal challenge from a rival bidder.

Procurement Minister Carla Qualtrough announced the deal in Halifax early Friday, saying the Royal Canadian Navy’s 15 new warships will be built by Irving and based on the British−designed Type 26 frigate.

The initial contract with Irving Shipbuilding is valued at $185 million including taxes and will increase as design work progresses, the government said Friday, adding a policy will apply to ensure every dollar put into the contract will result in a dollar back into the economy.

Qualtrough made the announcement at Irving’s Halifax Shipyard surrounded by hundreds of applauding workers, and touched on the persistent suggestions it wasn’t a fair and balanced fight for the contract.

"Our government is providing the Royal Canadian Navy with the ships it needs to do its important work of protecting Canadians," she said in a statement.

"This procurement process for Canada’s future fleet of Canadian Surface Combatants was conducted in an open, fair and transparent manner that yielded the best ship design, and design team, to meet our needs for many years to come."

Lockheed’s design had been selected as the best last October, beating out submissions from Alion Science and Technology of Virginia and Spanish firm Navantia to replace Canada’s existing frigates and destroyers.

In a statement, Lockheed Martin Canada’s vice−president praised the decision.

"This award is true validation of our Canadian capability," Gary Fudge said. "Our team is honoured, knowing that we offered the right solution for Canada and a proven ability to perform on complex defence programs."

Defence Department officials will now sit down with Irving and Lockheed to figure out what changes need to be made to the company’s design, along with the navy’s requirements to make sure they fit. The department’s top procurement official, Patrick Finn, has said the plan is to keep changes to a minimum to keep costs and schedule under control.

Qualtrough said Friday the design work is expected to take three to four years to complete, with construction set to begin in the early 2020s.

The selection comes after difficult negotiations that saw Alion ask the Canadian International Trade Tribunal to quash the decision, saying Lockheed’s design did not meet the navy’s requirements and should have been disqualified.

The tribunal initially ordered the government not to award a contract to Lockheed until it could investigate Alion’s complaint, but later rescinded that decision and then tossed the case entirely last week.

Alion has also challenged Lockheed’s selection at the Federal Court, though that case is expected to drag on. Alion alleges that the Type 26 did not meet the navy’s requirements for speed and crew accommodations.

The bid by Lockheed, which also builds the F−35 stealth fighter and other military equipment, was contentious from the moment the design competition was launched in October 2016.

The federal government had originally said it wanted a "mature design" for its new warship fleet, which was widely interpreted as meaning a vessel that has already been built and used by another navy.

But the first Type 26 frigates are only now being built by the British government and the design has not yet been tested in full operation.

There were also complaints from industry that the deck was stacked in the Type 26’s favour because of Irving’s connections with British shipbuilder BAE, which originally designed the Type 26 and partnered with Lockheed to offer the ship to Canada.

Irving also partnered with BAE in 2016 on an ultimately unsuccessful bid to maintain the navy’s new Arctic patrol vessels and supply ships. That 35−year contract went to another company.

Irving and the federal government rejected such complaints, saying they conducted numerous consultations with industry and used corporate firewalls and safeguards to ensure the selection process was completely fair and unbiased.