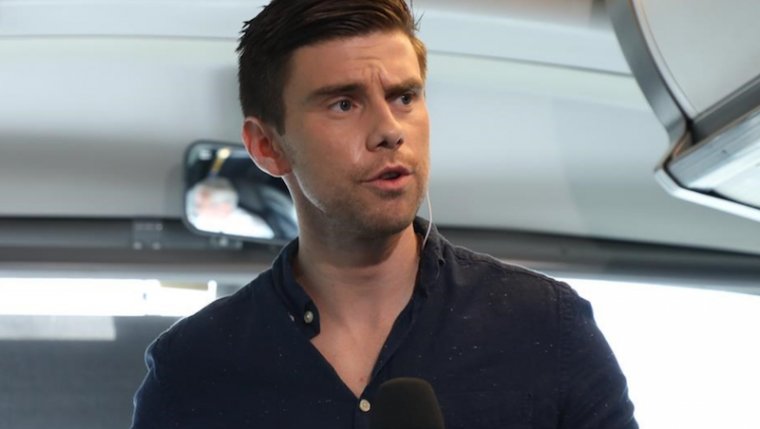 TORONTO — An incident in which a man nuzzles and licks the ear of an on−air TV journalist reporting on a comedy event was roundly condemned on Wednesday, with some arguing the actions amounted to an assault.

In a widely seen clip, CBC’s Chris Glover is talking back to the studio when one man leans into the frame behind him and mugs in front of the camera before leaving, while a second man, dressed in a green Saskatchewan Roughriders hoodie, moves in on the reporter.

The man, identified by multiple viewers as comic actor Boyd Banks who has appeared on CBC shows, proceeds to demonstratively lick Glover’s ear and kisses his neck while the journalist continues speaking, before throwing it back to the studio with the line:

"Things are getting a little awkward out here, so I’m going to pass it back to you," Glover said from the Comedy Bar in Toronto.

Neither Glover, who maintained a smile during the segment, nor Drummond responded to a request for comment. However, a spokesman for CBC denounced the man’s actions and praised the reporter.

"Chris Glover showed remarkable composure and professionalism in the face of a very awkward situation," Chuck Thompson said. "Unfortunately, the trend of harassing reporters continues and is something we take very seriously."

Thompson called such incidents as "troubling as they are unacceptable." He did not say what, if anything, the broadcaster planned to do about the situation. Toronto police said they had no record of a complaint involving Glover.

Saskatchewan−born Banks, 54, who has multiple film and TV credits including the CBC’s "Little Mosque on the Prairie," could not be immediately reached for comment.

In recent years, female reporters in particular have been the subject of crude, harassing catcalls which, in some cases, have resulted in charges against the perpetrator. More recently, other journalists have been physically assaulted while doing their jobs in public.

The 40−second clip of Glover sparked outrage on social media, with some condemning what happened as an assault, and others saying they would not have remained so calm.

"This is disgusting," CBC reporter Lorenda Reddekopp tweeted. "I also can’t believe none of the bystanders did anything."

"This is so disturbing and I get more uncomfortable every time I watch," said Toronto−based writer Jeffrey Vallis, who posted the clip on Twitter along with his comment. "Why do people think it’s OK to harass and assault reporters while they do their job?"

Some, such as fellow comic Ian Sirota, defended Banks, who lives in Toronto.

"Boyd Banks also regularly feeds hungry comedians out of his own pocket and is one of the bravest comics I know," Sirota said in a Facebook post. "Before you tear someone down look at all their actions not just one."

Thompson said the particular assignment was viewed as "low risk" but noted situations can be unpredictable. Regardless, he said, the fact that a well known comedian was involved made no difference.