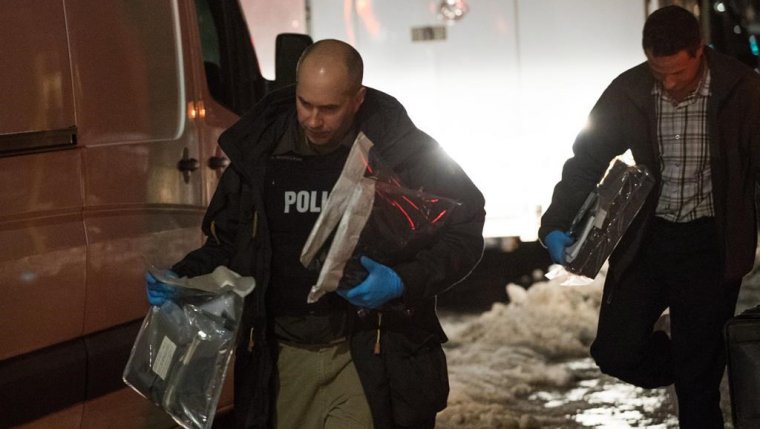 KINGSTON, Ont. — The RCMP have charged a Kingston youth with terrorism, saying he allegedly tried to get someone to plant a bomb.

A second man has been arrested but not charged in the same alleged plot.

The youth is charged with knowingly facilitating a terrorist activity and with counselling someone to use an explosive or other lethal device to cause death or serious bodily injury. The police say no actual device was ever planted.

"There was no specific target identified," said Supt. Peter Lambertucci, who is in charge of the RCMP’s national−security enforcement team, at a news conference in Kingston Friday.

"There was an attack plan, which is what led to our disruption yesterday."

Amin Alzahabi, the father of Hussam Eddin Alzahabi, 20, said Friday his son had been arrested but not charged. He was unsure what was happening.

"I want to know where he is," Amin Alzahabi said at his Kingston home.

The police have 24 hours after arresting someone to either charge them or let them go.

The Mounties said they have been investigating the pair since December, following a tip from the FBI in the United States. Lambertucci said Hussam Eddin Alzahabi is friends with the youth who has been charged with terrorism.

"The individual was reported to be involved in the manufacturing of homemade improvised explosive devices," Lambertucci said.

Investigators confirmed that during a search of the youth’s home, he said, adding a potentially explosive substance was removed from the home and blown up to neutralize it.

"There were elements and trace elements but I’m not prepared to speak on that with regard to the ongoing investigation," he said.

The RCMP said they are "working closely" with the local police on the probe, calling it an "ongoing and evolving situation."

Police were seen Friday searching a home linked to the second arrest. Police cars and orange barricades barred traffic from the street.

The Alzahabi family came to Canada about two years ago after fleeing war−torn Damascus for Kuwait. Their home in Syria has been destroyed. The father was once imprisoned for not joining the ruling political party in Syria and would be vulnerable to arrest and severe retaliation should he and the family return home, according to one of the churches that sponsored them as refugees.

Bronek Korczynski, who co−chaired the sponsorship committee, said he and other members of the four churches that brought the family to Canada were shocked by news of the younger Alzahabi’s arrest.

"Even though our sponsorship ended last July, many of us in the group have maintained relationships with the family — meaningful relationships — and this is just a real body blow," he said. "We’re just gobsmacked by this. It’s so out of whack with the family we’ve come to know and care for."

Korczynski said he’d been at a meeting with Kingston Police and RCMP on Friday morning, alongside other community leaders. Officers wanted to ensure the leaders had the answers they needed, and were able to continue providing services to the family and the broader community.

"It was very much an opportunity to say, ’What can the community do to make sure that this doesn’t become an incident that unjustifiably targets any ethnic group, national group, religious group?’ " he said.

He added that Alzahabi has both a younger and an older sibling, both of whom are dedicated to their education.

The RCMP say the agencies involved include the FBI in the United States, Kingston police, the Ontario Provincial Police, the Canada Border Services Agency and the federal agency that tracks suspicious financial activities. Lambertucci said as many as 300 people have been involved in the investigation.

The effort included a small RCMP surveillance plane, whose circling over Kingston has puzzled, and sometimes annoyed, residents for weeks.

"The aerial support of the plane allows us surveillance capabilities from the air to ensure that we are able to maintain public safety and mitigate risk surrounding certain addresses, certain areas of concern," Lambertucci said.

"The government of Canada constantly monitors all potential threats and has robust measures in place to address them," Public Safety Minister Ralph Goodale said in a statement. "Canadians can be confident that whenever credible information is obtained about a potential threat, the RCMP, CSIS and other police and security agencies take the appropriate steps to ensure the security of this country and the safety of its citizens."

Goodale said the country’s official threat level remains at "medium." It has stood at that level since the fall of 2014.

In a joint statement, the Anglican and Roman Catholic dioceses said they support the police in their investigation and pointed out that hundreds of people have been successfully settled in Canada as church−sponsored refugees after passing government screenings.

Conservative Leader Andrew Scheer praised the police work that led to the arrests and accused the Liberals of weakness on terrorism and running a lax refugee−screening system.

"These kinds of incidents serve to underscore the critical importance of having strong anti−terrorism laws and appropriate penalties for those found guilty of breaking them," Scheer said in a statement.

"Canada’s Conservatives have worked steadfastly to strengthen new Liberal anti−terror laws that actually aimed to water down penalties for terrorist offenders and restrict the ability of investigative agencies to disrupt terror plots."

"It is also clear that Canada’s refugee screening process needs to be seriously examined," he added. "We’ve recently learned of several examples of dangerous individuals entering the country due in part to lax screening procedures."

Scheer cited a 2017 audit of the Canada Border Services Agency that found 39 cases in which Syrian refugee claimants admitted to Canada didn’t receive proper screening. The agency acknowledged the error but said a review afterward found that none of the 39 people was inadmissible.