House Explosion Kills One & Injures One in Kitchener 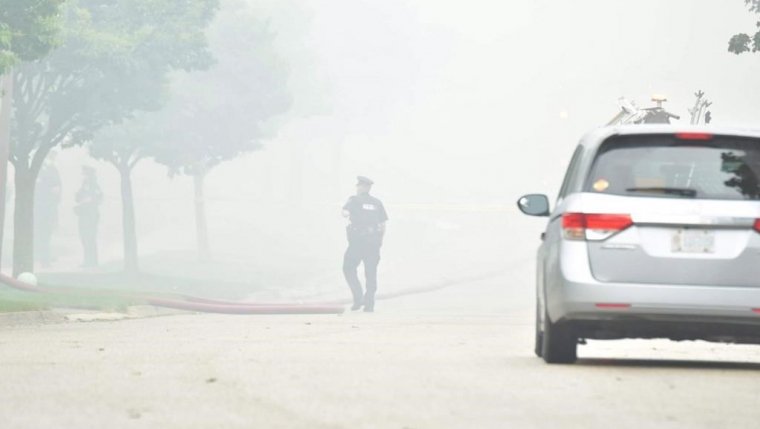 KITCHENER, Ont. — A woman was killed and a man was airlifted to hospital after an explosion destroyed a home and started a fire in Kitchener, Ont., early Wednesday, police said.

The blast took place at a home on a residential street a little after 8 a.m., police spokeswoman Cherri Greeno said.

"It’s fair to say the house has been levelled," she told The Canadian Press. "It’s still burning."

Police said they believed everyone thought to have been at the home had been accounted for.

"We can’t go inside or go through any of the debris for safety reasons," Greeno said. "Firefighters are still hosing down the home as I speak, I’m watching them do it right now."

Greeno did not release the name of the woman who died in the fire, and said the injured man was in critical condition.

Investigators said they were found in the rubble behind the home, and a dead dog was spotted inside.

Two homes nearby sustained damage from the blast or caught on fire as a result, Greeno said, while several other properties were damaged by smoke.

Some area residents had been evacuated, while others were cautioned to stay in their homes, police said.

There was no immediate word on the cause of the fire, deputy police Chief Kevin Chalk told a news conference, noting that the focus was firmly on suppressing the blaze.

"A house explosion like this obviously is cause for concern," he said. "There could be a number of reasons for it — some of them would be criminal some would not be. All options are open at this point until we have a chance to get into the residence and do that examination."

More than 30 firefighters who were on duty at the time of the blast remained on scene late Wednesday morning, while backup was brought in on overtime to handle other emergencies in the city.

Bil Ioannidis, a city councillor who lives nearby, said he heard a boom and rushed to the scene, where he saw smoke rising above the tree−lined street and firefighters battling ongoing blazes.

"It smelled like a campfire," he said of the area he described as a quiet, family friendly neighbourhood.

Dolly Cooper, who lives two streets away from the scene, said she heard a bang and felt her house shake.

After checking her own home, Cooper said she opened the door and noticed smoke billowing in the distance.

"When I went out, my tears came down when I saw the smoke," she said. "It was overwhelming."

Investigators said gas, water and power in the area will remain shut off for a "lengthy amount" of time.