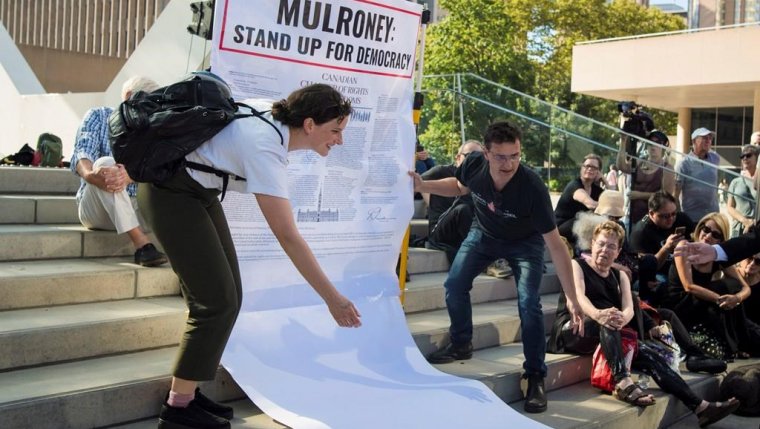 Five stories in the news for Thursday, Sept. 13

Foreign Affairs Minister Chrystia Freeland says Canada's negotiating team spent several hours Wednesday updating Prime Minister Justin Trudeau about the state of NAFTA talks. Freeland didn't go into any detail about the issues on which the prime minister needed to sign off or what instructions she and the rest of the NAFTA team received. But she said lead negotiator Steve Verheul and Ambassador David MacNaughton were returning to Washington to resume negotiations today.

Canada's spy agency wants to shield the identities of five current and former employees when they testify in the lawsuit of a Montreal man who was detained in Sudan — prompting vehement objections from the man's lawyer. Federal lawyers say the Canadian Security Intelligence Service agents' identities must be kept confidential in order to protect the individuals from personal harm and to ensure the service can continue to work effectively. Abousfian Abdelrazik is suing the Canadian government for an apology and compensation over his lengthy overseas detention.

The federal government says it has agreed to pay $100 million to settle a four-year legal battle with thousands of disabled veterans. The vets had launched a class-action lawsuit after some of their financial benefits were clawed back. The settlement, which must still be approved by the Federal Court, would provide more than 12,000 veterans with payments of between $2,000 and $50,000 depending on when they served and the severity of their disabilities.

SHOP TRYING TO REPLACE STOLEN WIGS FOR KIDS WITH CANCER

The manager of a Vancouver store where wigs intended for kids with cancer were stolen says it's been heartbreaking to call their families and break the news. Frances Rae, manager of Eva and Company Wigs, says all of the families have been understanding. Some of the kids had skipped the first week of school so they could start classes with their new hair, she said. Now they'll have to wait six weeks to two months for new ones. Police say at least 150 wigs were taken from the store early Friday morning.

BRONCOS RETURN TO THE ICE FOR EMOTIONAL SEASON OPENER

The Humboldt Broncos tried to emerge from the grip of tragedy Wednesday night by playing some hockey and raising banners to honour all the people who were on their team bus when it crashed in April. Family members and fans cheered through tears at Elgar Petersen Arena as 29 yellow and green flags were unfurled honouring the 13 injured and remembering the 16 dead. The Broncos came up short in an emotional first regular-season game before the ceremony. The Nipawin Hawks, the same team the Broncos were travelling to face when the crash happened, rode two late second-period goals to a 2-1 victory.

— Carrie Cussons, president and CEO of Scotiabank Centre, will host a special announcement in Halifax.

— Dollarama and DavidsTea are among the companies presenting third-quarter results.

— The mummified remains of an ice age era caribou calf and wolf pup unearthed in the Klondike gold fields will be unveiled in Dawson City, Yukon.