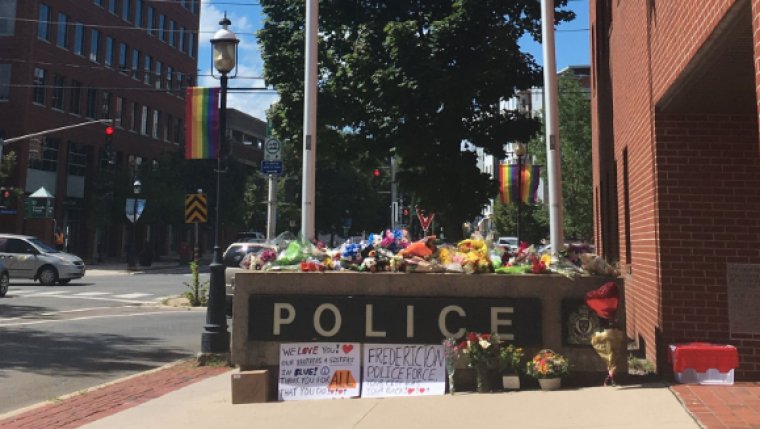 FREDERICTON — A 48−year−old man has been charged with four counts of first−degree murder in a shooting that left two police officers and two civilians dead in New Brunswick’s capital on Friday morning.

They have not said if they believe Raymond knew any of the deceased.

Robichaud and Wright were in a new relationship, according to his cousin, Sean Callahan: They had just gotten together at the beginning of August.

Robichaud was a loving parent who played bass and sang in a few local bands, said Callahan.

"The guy was so likable, like, I don’t think he had anybody that hated him, and Donnie, if he even hated you, he’d still give you the shirt off his back — he would help you out," Callahan said.

Friends and family took to the Facebook status announcing Wright and Robichaud’s relationship to mourn on Saturday.

"Thank you for being a great aunt for my kids," one user wrote. "Please watch over my babies from up there."

"So sad. She and Donnie are going to be missed by many," another said.

Officials clarified Saturday that one person was in hospital after the Friday shooting — Raymond, who is being treated for serious injuries. He is to remain in custody until he appears in court Aug. 27, police said.

Burns was married with three kids, while Costello was a father of four and Robichaud had two teenage sons and an older daughter.

As of Saturday morning the area surrounding the crime scene — the apartment building where Robichaud had lived for several months, according to Callahan — remained cordoned off by yellow tape, but police allowed some shaken residents through to check on their pets.

Joe Cartwright emerged from the building to say all the doors in the complex had been kicked in and one of his cats had escaped.

Cartwright said his girlfriend and four−year−old son had been at home during the shooting, and he rushed to the scene in a panic once he realized his family could be in danger.

"I’m very torn up," he said. "I’m not doing very well at all, my girlfriend’s not, my son’s not, so we’re going to go and just try to calm down from this."

An officer said it was unclear how long the probe would take, and police have asked anyone who captured photos or video of the incident to come forward.

Fredericton police said Friday night that the city and Red Cross had found lodging for 50 residents unable to return to their homes on Brookside Drive on the city’s north side.

Meantime, police forces across the country had lowered their flags to half−mast in mourning.

"Just after I tucked my son in bed tonight, and reflected on the day, it was with chagrin that I realized that at least seven children in Fredericton tonight would not have the same luxury. To the children of Sara Burns and Robb Costello, I wish you peace and comfort this night," Halifax police chief Jean−Michel Blais tweeted on Friday.

That number has now climbed to at least 10 children who lost a parent.

Fredericton deputy police chief Martin Gaudet said Friday the two officers responded to reports of a shooting in an apartment complex at about 7:10 a.m. and found two victims on the ground, a man and woman.

"That’s when they (the officers) were shot," he said during a news conference.

"There were many officers in and around the building at that time, so when the call came in shots fired, officers jumped in a cruiser and attended the scene. They were the initial officers on scene."

Costello, 45, was a 20−year police veteran, while Burns, 43, had been an officer for two years, and an auxiliary officer prior to that.

— With Nicole Thompson in Toronto