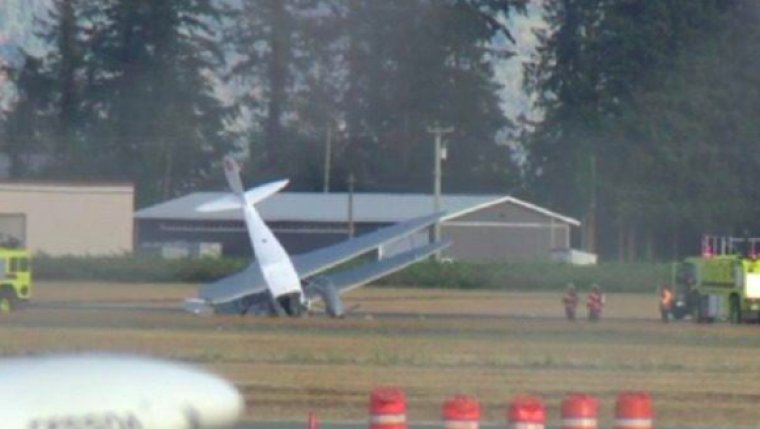 ABBOTSFORD, B.C. — Five people are in hospital, including one in critical condition, after a 1930’s era biplane crashed shortly after take off Saturday at the Abbotsford International Airport in British Columbia.

Jadene Mah, a spokesperson for the Abbotsford International Airshow, said there was a pilot and four passengers on board the deHavilland Dragon Rapide when it crashed on the runway at 5:30 p.m., almost an hour after the airshow ended.

Mah said all five were transported to hospital by both road and air — the pilot of the biplane was in critical but stable condition, one passenger had serious injuries, and the three other were being treated for minor injuries.

"The most critical was the pilot, he’s actually stable and going into surgery today," said Mah in a phone interview Sunday.

Mah said everyone involved were lucky emergency resources were still on the airfield and able to respond immediately.

"They responded inside a one−minute window, which is a tremendous response time," added Mah.

Airshow officials had said in an earlier Facebook post that the aircraft, which Mah called a piece of "living flight history," was operated by a museum, offering member flights.

Mah said the Transportation Safety Board is investigating the cause of the crash, and that the Airshow will proceed as scheduled on Sunday because of the first responders and Abbotsford airport staff.

"We definitely want to let everyone know how grateful we are for the emergency responders and the professionalism of the airport personnel here," she said.

Inspectors from the Transportation Safety Board were not able to respond to inquiries at the time of filing.

The deHavilland Dragon Rapide was built in the 1930s by British aircraft manufacturer deHavilland and was designed for short−haul flights, carrying six to eight passengers at a time.