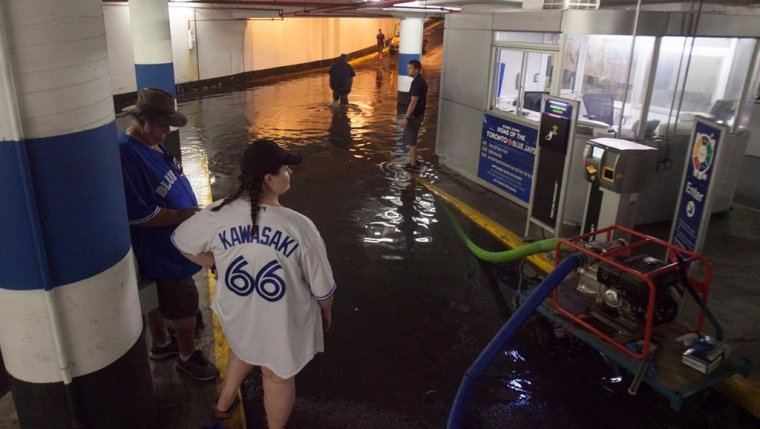 Toronto police mounted a dramatic elevator rescue on Tuesday night while the city was being drenched by a heavy rainfall that caused flash flooding, street closures and several cars to be trapped in flooded underpasses.

Two men had to be rescued from an elevator that was stuck in the basement of a commercial building in the city’s north end.

Police spokeswoman Katrina Arrogante said water had almost filled the elevator before the men were rescued by officers who had to swim down to the basement to get them out.

"The water level has rose to six feet and there was only one foot of air space left for the two males to breathe," she said, adding that the men were able to keep their heads above water by standing on handrails inside the elevator.

"The two officers answering the call then found a crowbar and swam into the basement location of the commercial building, pried open the elevator and rescued the two males that were stuck inside," Arrogante told The Canadian Press.

She said one man suffered a hand injury but did not require hospitalization and neither of the responding officers were injured.

Arrogante said the initial call came in at 10:52 p.m. and police were on the scene quickly.

"The officers responded at 10:58, so all within six minutes we were there and able to rescue the two men," she said.

"It’s actually quite an amazing story and we’re just happy everything turned out in a positive manner."

Three cars were submerged in one north−end underpass (near Keele St. and Wilson Ave.) and the police marine unit rescued people from four cars trapped by rising water at a downtown underpass (Lower Simcoe and Bremner). There were no injuries reported.

The downpour also resulted in flooding in the Toronto subway system. Transit authorities said shuttle buses were transporting passengers between the Finch West and Wilson stations in the city’s north end early Wednesday. There was no word on when service would resume.

The deluge also caused problems at Toronto city hall. A staffer tweeted that the roof outside Mayor John Tory’s office was leaking so badly that staff ran out of recycling bins and garbage cans to contain the water.

Environment Canada had issued a special weather statement for the city, saying between 50 and 100 millimetres of rain was expected in some locations, particularly near the lakeshore. The agency said more than 64 millimetres of rain had fallen at Billy Bishop Airport just south of the downtown core in only two hours.

The special weather statement was lifted just before 11:30 p.m. as the heaviest showers moved out over Lake Ontario.