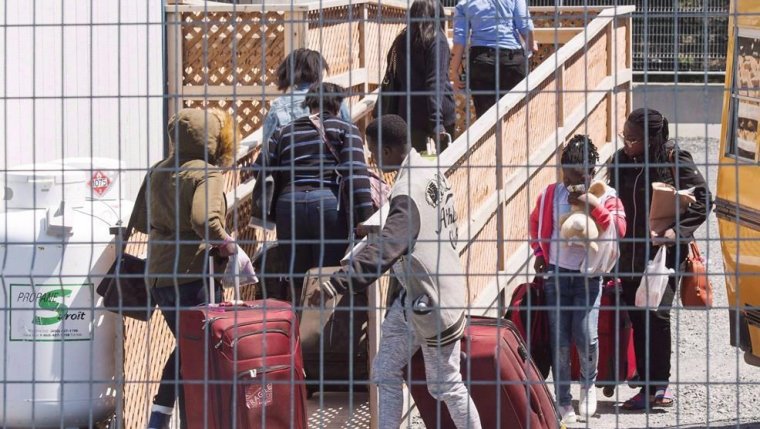 The figures show Canada spent over $5 million in 2017 and the first part of 2018 on temporary housing, food and water to migrants who crossed into Canada from the United States through the unofficial crossing in St. Bernard−de−Lacolle, Que. Some of this money also went towards security services.

The data was recently tabled in the House of Commons in response to written questions from Opposition MPs.

A detailed breakdown of expenditures for shelter and humanitarian services shows the Canada Border Services Agency (CBSA) has paid for items such as generators and heaters, water and hotel rooms for irregular migrants.

The CBSA has also contracted the Canadian Red Cross to help provide services to asylum seekers in Quebec, where the vast majority of irregular border crossers have arrived this year.

This includes handing out hygiene kits, blankets and baby supplies such as diapers and formula. Basic health care services are also offered with the help of a nurse on site, and the option of transporting people to hospital for more serious health care needs.

Carl Boisvert, spokesperson for the Canadian Red Cross in Montreal, says volunteers offer food and shelter to asylum seekers from the time they arrive in Canada until they are cleared by border security officials to proceed to Montreal or Toronto to await a hearing at the Immigration and Refugee Board — a period that can last a few days.

"We make sure that they are safe and we are taking care of them," said Boisvert.

Most asylum seekers who arrive in Canada are simply seeking a better life after fleeing their home countries due to war and violence, Boisvert says.

When they arrive, they are warmly welcomed.

"I’m proud to be in this position," he said.

"(The asylum seekers) crossed borders and we know it is very difficult. They’ve made hard choices. And just being there to help them and say, ’Hi, welcome to Canada, the Red Cross can take care of you, we’re going to provide you shelter, food and just make sure you are safe, for now,’ I know there were some volunteers who were there who were saying they are honoured to just help other humans, even for a short time."

Despite the fact these individuals are "illegally" crossing the Canada−U.S. border, Canada detains only a fraction of them.

In Canada, immigrants and refugees may be detained if there are reasonable grounds to believe they are inadmissible to Canada, a danger to the public, a possible flight risk or if they are unable to satisfy border officials as to their identity.

The RCMP intercepted a total of 20,593 asylum seekers crossing irregularly into Canada last year and another 9,481 between Jan. 1 and May 31 of this year.

Meanwhile, it appears very few irregular asylum seekers in Canada fail to show up for their immigration hearings — one of the key rationales used by the Trump administration in the United States for its policy to detain and federally prosecute all illegal immigrants to the U.S.

Between February 2017 and March 2018, a total of 12,626 refugee claim hearings were held in Canada. Of those hearings, 390 were cancelled due to no−shows and only 20 of those hearings, representing 32 people, were for illegal border crossers.

Boisvert would not comment on how asylum seekers in Canada are treated compared to how they are being treated in the United States, as the Red Cross provides humanitarian assistance in countries around the world.

But he did say they are well cared for in Canada and he was stuck by the sense of optimism and hope he witnessed among those arriving at the Roxham Road crossing.

"It wasn’t very sad. They were saying, ’We’re trying to find a better future for our families,’ and I saw many smiles," Boisvert said.

"They said, ’It’s a hard time. We don’t know where we’re going, but we hope we have a better future.’ That’s what I saw on site."