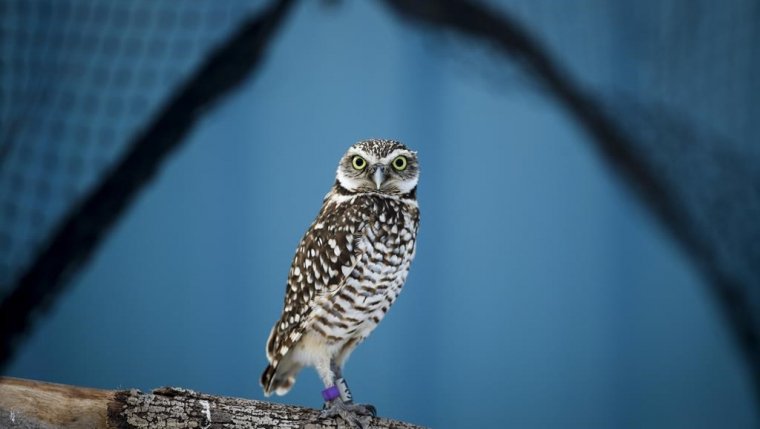 CALGARY — A narrow, snow−covered gravel road winds its way to a hidden gate that opens to a parcel of land on the southern tip of Calgary.

The Devonian Wildlife Conservation Centre, which opened in 1984 and is operated by the Calgary Zoo, is dedicated to saving endangered species.

"Often we are the last resort for many endangered species that have struggled in the wild," explains Dr. Axel Moehrenschlager, the zoo’s director of conservation and science.

Staff aim to give the animals the best possible care and make them suitable to release back into the wild.

"These are species that are destined for the wild, or their offspring are, and so we need to make sure that they are kept as wild as possible. These are extremely sensitive species. We don’t want people to randomly climb fences and being noisy and disturbing the animals."

The program’s reputation has grown over the years to the point where it is getting requests to take on more species from around the world, Moehrenschlager says.

The centre is also planning to relocate to a more private location east of Calgary within the next couple of years. The city’s urban spread has started encroaching on the property, he says.

"It used to be in the middle of nowhere, but we’ve got developments happening so we need to transition that and move it."

Some of the animals aren’t bothered by outside stimuli.

"Well come on over. How you doing?" says Calgary Zoo general curator Colleen Baird after calling to two Asiatic horses kept separate from the main herd.

The whooping cranes, however, are a different matter.

Their loud, single−note bugle calls can be heard clearly inside the burrowing owl sanctuary. "They always wake up the neighbours," Baird says with a laugh.

A visit to see the cranes wasn’t possible because anything upsetting to them could reduce the need to breed.

"They will get cautious and often will shut down and not breed, as the environment and outward cues are telling them that conditions are not ideal or safe to expend all the energy it takes to raise a chick," Baird says.

"Any changes the cranes will pick up on right away, as they are defending territories and males wanting to have a safe place to do their mating dance to the females."

The centre is the only facility in Canada that helps breed whooping cranes and its program has been a big success, Baird says. Their global population had dropped to 14 in the 1990s but has since grown to more than 400.

The burrowing owls habitat is also a busy place.

Zookeeper Joan Gellatly has been on the job for 30 years and is responsible for their care and feeding. "We make sure everybody’s healthy and happy, fed and watered. Just like when you’ve got pets at home, it’s kind of our job."

The burrowing owl program is in its third year. Research teams also grab owlets from the wild in the spring and bring them into captivity for 10 months because they often don’t survive.

At the end of the 10 months, researchers match up predetermined males and females, tag them and release them.

"Then researchers will follow the birds through the summer time. And, if they pair−bond for the season, they nest and the eggs and the owlets hatch out," said Gellatly.

"We have had success with that."

Moehrenschlager describes the centre as doing amazing things to help animals and ecosystems.

"All we’re trying to do is prevent extinction so we need to make sure that these programs do their part to help the species."