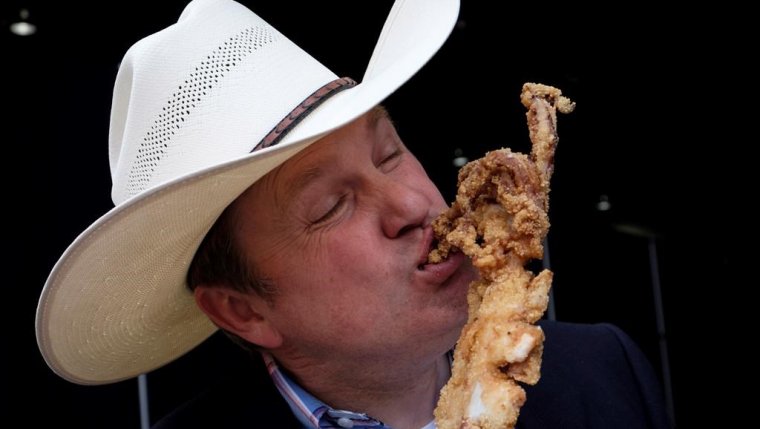 CALGARY — Traditional corn dogs and deep−fried doughnuts are still on the menu but Calgary Stampede organizers say they’re being joined by giant squid on a stick, cheesy chicken hearts and even prairie oysters for foodies attending the 10−day event.

Midway operations manager James Radke says the Stampede menu has to have something for everyone but it’s the craziest combinations that tend to spark the most interest.

"We look for those foods — crickets on your candy apple, crickets in your grilled−cheese sandwich. How can you take those traditional foods and turn them upside down and really make people think about what they’re eating?"

The so−called giant squidward, complete with tentacles, is about the size of a baseball mitt and deep fried.

The prairie oyster balls, which are calf testicles, are braised in a savoury sauce, sliced and served over sweet doughnuts with a blueberry sauce along with whipped cream and crushed nuts.

"Whether their reaction to it is positive or negative, that actually doesn’t matter. What matters is it’s generating an emotional response to food and you know you’ve got them right away."

Yan Situ from the Happy Fish Catering food truck expects the squid will be a big seller.

"It looks a little scary but it tastes good though. It’s nice and juicy inside and then we put on our special bread crumbs so it’s really crunchy outside," she said.

"It comes in two flavours — salt and pepper and curry pepper. That one’s a little bit spicy, gives a little more heat for the street."

Only eight or 10 years ago, Radke said, Stampede food was a secondary consideration.

"That’s changed with the advent of food television, of the Food Network, the foodie movement, restaurants changing and everybody really jumping upon that bandwagon. The midway has had to do that as well," he said.

"The midway has had to transform itself to become a culinary destination."

This year’s Stampede runs from July 6 to 15.