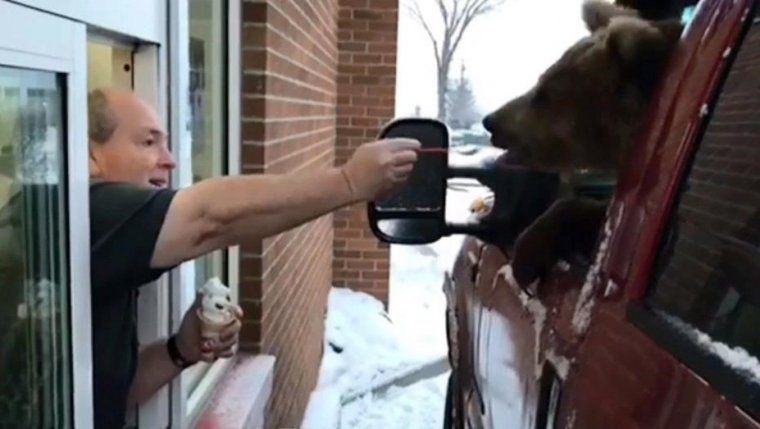 INNISFAIL, Alta. — The province has laid two charges under its Wildlife Act against a central Alberta zoo after a bear was taken through a drive−thru for ice cream.

A video, posted on social media in January by Discovery Wildlife Park in Innisfail, showed a one−year−old captive Kodiak bear named Berkley leaning out a truck’s window and being hand−fed ice cream by the owner of the local Dairy Queen.

Bear experts called it irresponsible and disrespectful — although a zoo trainer defended it as educational and done on "purpose for a purpose."

Officials with the province began investigating the video and the terms of the zoo’s permit.

Wildlife officers allege the zoo failed to notify the province prior to the bear leaving the park.

Discovery Wildlife Park and its owners, Doug Bos and Debbie Rowland, are to appear in Red Deer provincial court on May 28.

"Under the terms and conditions of the zoo’s permit, the charges are directly related to the alleged failure of the park to notify the provincial government prior to the bear leaving the zoo," said a statement from the province late Monday.

One count is related to the bear being taken through the drive−thru for ice cream, while the other pertains to the bear leaving the facility on other occasions in 2017.

The charges were laid under Section 12(3) of the Wildlife Act, which states a person must not contravene the terms or conditions of a licence or permit.

The zoo’s permit, which is regulated by Alberta Environment and Parks, has been revised to impose new conditions.

Those include requiring the zoo to provide more details when asking to transport a controlled animal or wildlife and to keep those animals in a cage, crate or kennel when in a vehicle.

It also says the zoo cannot put any animals on display outside the facility without prior permission from the province nor can it allow any member of the public to have physical contact with animals such as monkeys, cougars, wolves or bears.