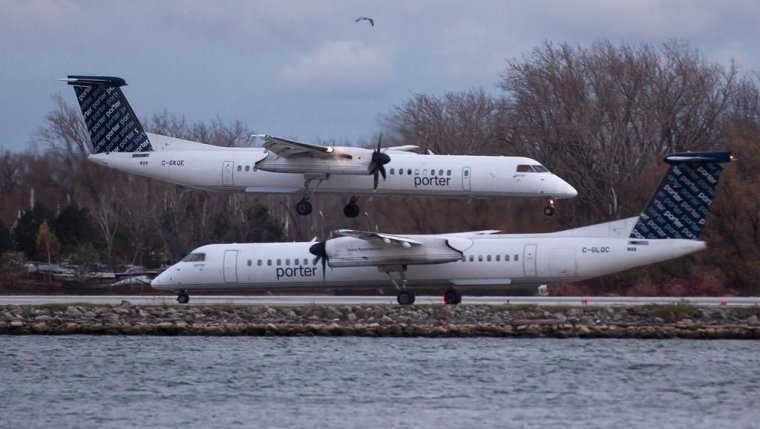 TORONTO — Aimia Inc. says it has a new deal for Toronto−based Porter Airlines to become a preferred Canadian airline for the Aeroplan loyalty points program as of July 2020, when the current arrangement with Air Canada ends.

The announcement follows Aimia’s rejection of a bid for Aeroplan from an Air Canada−led group that includes the key Aeroplan credit card partners Toronto−Dominion Bank, Canadian Imperial Bank of Commerce and Visa Canada.

Porter’s fleet of aircraft is only a fraction the size of Air Canada’s but Aimia has also been in discussions with the Oneworld airline alliance, whose members include British Airways, American Airlines and Cathay Pacific.

Aimia chief executive Jeremy Rabe says that his plan is to strengthen its air offering after July 2020.

"We’ve committed to our five million members that they will be able to choose any seat on any airline, anywhere, any time with the new Aeroplan program," Rabe said.

He said Porter will be able to serve Aeroplan members on many popular routes.

The privately owned airline, which has its main hub on the Billy Bishop airport on one of the lakeshore islands near Toronto’s downtown, currently serves Toronto, Ottawa, Montreal and other Canadian cities from St. John’s, NL to Thunder Bay, Ont. as well as U.S. destinations including the New York City area, Chicago, Boston and Washington, D.C..

"This is a unique opportunity for Porter to join a well−established travel loyalty program and, in the future, reach its vast member base to aggressively promote our airline," said Michael Deluce, Porter’s chief commercial officer.

Porter’s existing VIPorter loyalty points will be converted into Aeroplan miles but its not yet clear what will become of currently accumulated Aeroplan points after July 2020, when Air Canada will switch to its own loyalty program.

Aimia announced Thursday that it had formally rejected an offer for Air Canada and its partners to buy the Aeroplan program and assume the responsibility for honouring about $2 billion worth of points that consumers have accumulated.

However, Aeroplan and Air Canada have each assured their customers that the Aeroplan points will be honoured as usual until their long−term contract expires.

Shortly before announcing the Porter agreement, Aimia reported that spending on Aeroplan credit cards remained strong in the second quarter and the company is "making solid progress" on streamlining its business.

The Montreal−based company also announced that its continuing operations had a net profit of $11.1 million or four cents per share in the second quarter, with revenue up 3.9 per cent to $375.4 million.

That contrasted with a year−earlier net loss of $25.1 million or 22 cents per share from continuing operations, or 18 cents per share if discontinued operations were included, with $361.3 million in the second quarter of 2017.