A Violent Year With 96 Homicides in Toronto 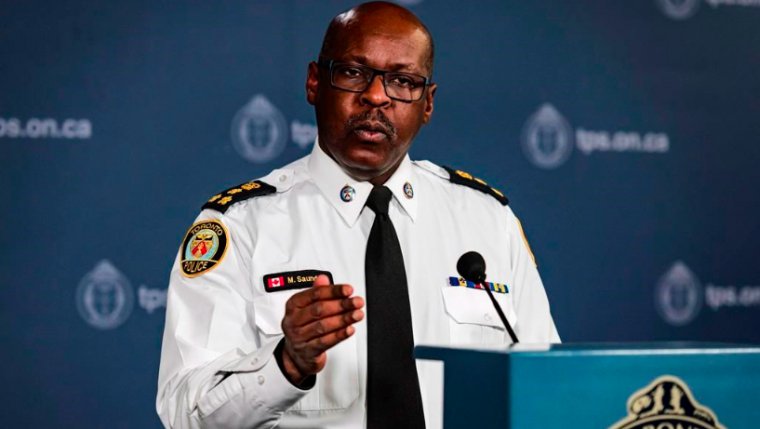 Mark Saunders said officers had recovered 514 handguns so far in 2018 — or 222 more than in 2017 — and the number of homicides caused by shootings had gone up by nearly 30 per cent.

The influx of guns came from a variety of sources, said Saunders, softening previous police statements suggesting domestically sourced firearms were the cause of the majority of gun crimes in the city.

The serge in gun violence remains his highest concern moving into 2019, said Saunders as he reflected on a year that’s seen Toronto grapple with a new homicide record and the aftermath of two mass−casualty attacks.

"Every day, we’re seeing more guns," Saunders said at a year−end news conference. "So that’s one aspect that has to be looked at. The second piece is what’s motivating people to use a gun to resolve issues."

Saunders did not provide a detailed breakdown of where the guns were coming from, though he indicated a growing numbers are produced by three−dimensional printers and repeated a regular claim that domestically registered guns were implicated in many crimes.

In the past, both Saunders and senior officers with the force’s guns and gangs unit have said the domestic firearms have eclipsed weapons imported from the United States as those most likely to be used to commit a crime.

Earlier this year, for instance, guns and gangs Det. Rob Di Danieli said about half of all guns used in crimes came from domestic sources, citing 2012 as the year when the trend took root.

Internal police data obtained under a Freedom Of Information request and shared with the Canadian Press, however, paint a different picture.

While the number of guns used in crimes dropped off between 2007 and 2017, guns imported from the U.S. were implicated in those crimes more often than domestically sourced firearms in eight of the past 11 years. Domestically sourced crime guns only surpassed U.S. imports in 2010 and 2015, with the two figures tied in 2016. The data did not include a breakdown of how many guns were sourced from countries outside of the United States or the number whose origins could not be traced.

When asked to comment on the apparent contradiction, a Toronto police spokesman said that over the last five years, there’s been a significant increase in investigations, arrests and successful prosecutions of people who have legally purchased firearms in Canada and then diverted or resold them for profit.

At Thursday’s news conference, Saunders said he was less concerned with identifying the source of firearms than pinpointing what prompted people to use them, attributing the spike in gun violence to street gang activity.

"If somebody wants a gun, they’re going to get a gun," he said. "There are more streams to get access to them than ever before, and so dealing with that is one aspect of it, but changing that motivation, or apprehending those that are motivated to shoot I think is more of a primary concern in today’s environment."

Saunders acknowledged that 2018 was a particularly challenging year for the force that found itself taxed by a series of high−profile incidents.

Vast resources were devoted to the investigation of alleged serial killer Bruce McArthur, who is accused of killing eight men with ties to the city’s gay community over a seven−year period.

A deadly van attack in April saw Alek Minassian allegedly go on a deadly rampage down a stretch of Yonge Street in a rental van, mowing down pedestrians and killing 10 people. Three months later, a gunman opened fire in the bustling Greektown neighbourhood, firing indiscriminately at pedestrians and restaurant patrons and killing two people before turning the gun on himself.

Saunders said those two high−profile events caused public concern about the safety of the city — even more so than the surge in gun violence.

"It’s one thing when you’re dealing with the gun play. It’s another thing when you’re walking down a street and looking over your shoulder or you’re sitting in a restaurant," he said. "The general public really felt stung by the two mass casualties back to back, and it’s still there."

Toronto residents, however, have been raising concerns about public safety as the city’s homicide rate steadily climbed throughout the year.

Police have recorded 96 homicides so far in 2018, seven more than the previous record high of 89 set in 1991. Force statistics suggest 51 of those homicides were caused by shooting, up more than 28 per cent from last year.

Mayor John Tory has repeatedly called for a handgun ban in the city.

Saunders said he believes Toronto is still one of the safest cities in North America and expressed hope that 2018 was an outlier rather than the start of a trend towards increased violence.