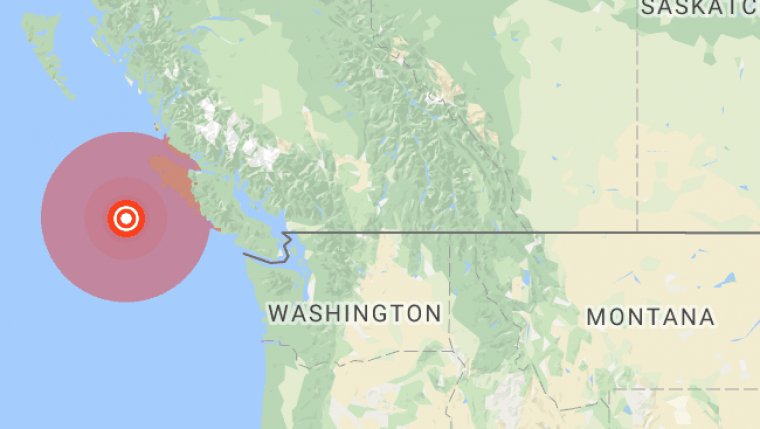 The U.S. Geological Survey reported a 6.6 magnitude quake about 260 kilometres west of Tofino, followed by a 6.8 tremor and then a third measuring 6.5.

Survey geophysicist Zachary Reeves said all three quakes occurred in the same general area over about an hour and at a shallow depth of approximately 10 kilometres.

Reeves, based in Golden, Colo., described the quakes as "pretty big."

Emergency Info BC tweeted that the quakes were felt in parts of the province, but there were no reports of damage or injury. No tsunami warning was issued.

John Cassidy, earthquake seismologist with Natural Resources Canada, said a tsunami was avoided because the quakes happened along a fault line where sections of the Earth’s crust are moving sideways.

"That horizontal type of movement is the least likely to generate a tsunami, because there is no vertical movement of the sea floor. It’s a horizontal slipping," Cassidy said in an interview from Victoria.

Several aftershocks were recorded in the hours following the quakes. Cassidy said more were expected.

Three earthquakes of that magnitude within a 45−minute window are unusual, Cassidy said, but he added they don’t necessarily mean a damaging shaker is imminent.

"These are a very good reminder of plate motions and earthquakes that occur here in this region. We have seen much larger in the past — and we will see larger again in the future — so it really is important to beware of the earthquakes, know what to expect and be prepared."

British Columbia is located on the Pacific Ring of Fire, an active seismic zone where thousands of mostly small earthquakes are recorded annually by sensors in the province.

Most of the quakes happen near the Cascadia subduction zone, an area where the Juan de Fuca and North American tectonic plates converge, stretching from Vancouver Island to northern California.

An earthquake early−warning system recently tested off the B.C. coast could give residents anywhere from 20 seconds to two minutes to prepare before a quake.

The first−of−their−kind warning sensors developed by Ocean Networks Canada are installed along the Cascadia subduction zone and when fully operating next March will be able to estimate location and magnitude of a megathrust earthquake.