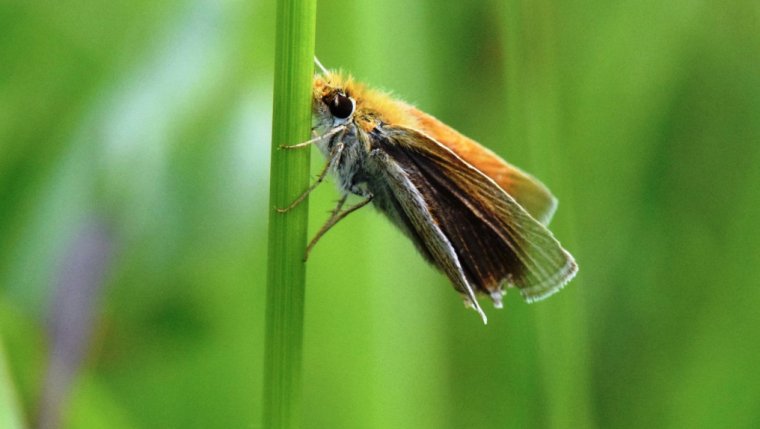 WINNIPEG - The Assiniboine Park Zoo’s Conservation and Research team has successfully released 13 captive-reared Poweshiek skipperling butterflies on the Nature Conservancy of Canada’s properties in the Tall Grass Prairie Preserve located in the RM of Stuartburn in southeastern Manitoba. This is another important milestone in a multi-year, collaborative research and conservation effort undertaken to save this critically endangered species from extinction.

“The recent report from the United Nations on the one million species at risk of extinction is a sobering reminder of the importance of biodiversity and the critical need to save species from extinction,” said Laura Burns, Research Conservation Specialist, Assiniboine Park Conservancy. “Whether you are talking about polar bears, snow leopards, or tiny grassland butterflies, this is a battle that will only be won if we fight it on multiple levels. As a modern zoological organization, we can contribute to that effort through research, conservation, and public education.”

The Poweshiek skipperling conservation project is a collaborative effort with the Nature Conservancy of Canada, the Minnesota Zoo, US Fish and Wildlife Service, the University of Winnipeg, and other partners in Canada and the United States. The Assiniboine Park Zoo is responsible for a head-starting program for the Manitoba population, with the aim to increase the wild population size by raising the skipperlings through their most vulnerable life stages. Last year’s release of six butterflies marked the first ever release of captive-reared Poweshiek skipperling, both in Canada and the USA. This year’s release builds on that achievement.

The loss of native prairie habitat has resulted in the dramatic decline of several highly specialized grassland species including the Poweshiek skipperling. Today, there are only two small locations where the butterfly can still be found: the Tall Grass Prairie Preserve in Manitoba and the other near Flint, Michigan.

“We are grateful to amazing partners like the Assiniboine Park Conservancy with whom we share a strong interest in recovery and conservation,” said Melissa Grantham, Conservation Biologist with the Nature Conservancy of Canada. “Efforts that address range-wide species needs, such as captive rearing and habitat management, are key to the persistence of endangered species, such as the Poweshiek skipperling.”

Over the summer, field work will monitor the heath and abundance of the wild population and gauge the success of the Zoo’s head-starting program.

“The results we have achieved so far are very encouraging, so plans are in place for further expansion of the program next year with the ultimate goal of bringing this species back from the brink of extinction,” said Burns.