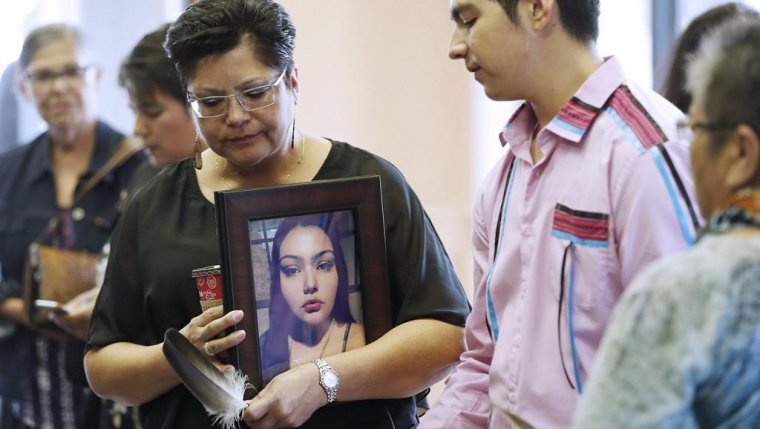 WINNIPEG — The mother of a young woman whose fatal beating was filmed and posted online said she wants one of the teens responsible to spend at least four years behind bars once she is sentenced in June.

Serena McKay’s body was found on the Sagkeeng First Nation last April and two teenage girls, who were 16 and 17, were arrested. The older girl, who has since turned 18 but can’t be named because she was underage at the time of the beating, pleaded guilty to second−degree murder in December.

"Nothing is going to be enough," McKay’s mother, Delores Daniels, said outside court in Winnipeg on Thursday. She held a framed photo of her daughter and was surrounded by family members wearing red shirts that said "Justice for Serena."

The Crown and defence jointly recommended the girl receive the maximum youth sentence of seven years. But the Crown wants the girl to spend four years in custody, while the defence is asking for one, with the rest of the time served in the community.

Judge Rocky Pollack said he will deliver a decision June 4.

"(I am) a little disappointed but I know that he has a lot to consider and that this is going to be a precedent−setting case and, like I told him in my victim impact statement, the world is watching," Daniels said.

McKay had been at a house party in the Sagkeeng community when there was an argument.

Two videos, which later circulated on social media, showed McKay being attacked while she begged for the beating to stop. Court heard the videos were filmed on the convicted teenager’s phone and she was the first person to text them to a friend.

On Tuesday, the teenager apologized to Daniels and the rest of McKay’s family in court. She said she lives every day "with this guilt and this shame.

"There are no words to describe how sorry I am," she said.

The apology won’t bring her daughter back or stop the videos of her brutal beating from continuing to circulate online, Daniels said.

"To me no amount of apology will ever satisfy me because my daughter’s life was taken."

McKay’s family left the courtroom on Tuesday when the videos were played, but Daniels said it’s important the judge sees them before deciding the sentence.

Some 24 victim impact statements were submitted to the court from family and friends. There were eight more from people who didn’t know McKay, including two from people outside Canada, who said they were affected by the death and the videos.

The judge said the eight statements from those who didn’t know McKay couldn’t be included in the record under the Canadian Victims Bill of Rights.

Daniels said people from around the world have reached out to her to offer support and condolences. She said that support, along with her faith, gives her strength.

"We just trust in God that they are going to be on our side, that He is going to look after things for us and that some time in the future, I will see my daughter again."

The other teenager pleaded guilty to manslaughter and the Crown is asking that she be treated as an adult when she is sentenced in June.

Note to readers: This is a corrected story. A previous version said two victim impact statements were not admitted.