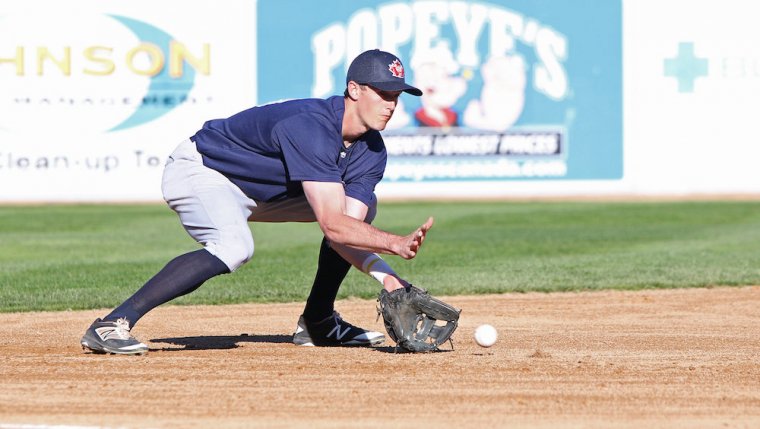 WINNIPEG, MB. - Early in the 2016 American Association baseball season, Wes Darvill was struggling at the plate. The veteran professional from Langley, B.C., either couldn’t get comfortable in the batter’s box or could get accustomed to the pitching at the independent level.

As the season went along, Darvill got his game together and finished the season with a .262 batting average with 51 runs scored, 41 runs driven in and 18 stolen bases. He vowed in the off-season that he’d start the 2017 season just as he left off the 2016 campaign – on a tear.

Darvill went back to the West Coast and started working out with a new trainer. By the end of the 2017 championship campaign, Darvill hit .309 with 53 runs scored, 19 doubles, four home runs, 49 RBI, and 30 stolen bases. He was the American Association’s starting third baseman in the 2017 All-Star Game and was later voted to the league’s Post-season All-Star Team.

On Wednesday, Darvill’s Goldeyes contract was purchased by the National League champion Los Angeles Dodgers. He will report to the Dodgers’ spring training complex in Glendale, Ariz., next month where he is expected to compete for a roster spot at the Double-A level.

Getting a new trainer might have been the reason he went form struggling .262 hitter to the best third baseman in the league – and the 73rd Goldeyes contract that has been sold to a Major League organization.

“My trainer, Scott Hebert is a guy who is originally from Winnipeg,” said Darvill. “He usually trains mostly hockey players in the Vancouver area, so yeah, I worked out with him in the off-season between 2016 and 2017. He’s a really fun guy to work out with. Tons of energy every day and it was fun to be in the gym with him every day.”

For those who might remember, Scott Hebert was a Goldeye himself, although it was a long time ago.

These days, he is the owner of Excel Fitness, and has been a Strength and Conditioning Coach for 15 years. He’s the former Assistant Strength and Conditioning Coach for the Vancouver Canucks (1999-2001), and has had much success with hockey players from the NHL, AHL, WHL, and countless Junior and Minor league players from lacrosse, rugby, football, soccer, baseball, and basketball.

What people might forget about Hebert, a consummate professional in his field, is the fact that during the Goldeyes first season, Scott Hebert was the team’s conditioning coach and then doubled as Goldie.

“Yeah, he doubled up as Goldie and the strength coach back in the 90s,” Darvill said with a laugh. “But he won a ring back in those days and we took a picture together when I received my first ring, so that was pretty cool.”

When he arrived in Winnipeg in April of 2016, Darvill had played seven seasons of professional baseball in the United States, but he’d never been to the ‘Peg. He used the opportunity to drive from west to east.

Darvill, who came out of the same high school program as former Blue Jays, now White Sox infielder Brett Lawrie, is a guy from B.C. who, strangely, never played any hockey. From the heart of baseball in Canada – the West Coast – he never dreamed of playing on Hockey Night in Canada, but he did dream of playing on ESPN’s Baseball Night in America.

“I never played hockey, just baseball,” said Darvill. “I played for the Langley Blaze, an awesome organization with great coaching, then I played for Greg Hamilton on the junior national team with a lot of great coaches and great players there. I got lots of exposure there and it was fun playing. It was like a pro atmosphere there. I was drafted by the Cubs right of high school (fifth round in 2009).”

Darvill, 25, was drafted by the Chicago Cubs and played seven seasons in the Cubs organization. The 6-foot-2, 190-pounder with the rocket arm put up good offensive numbers in the minors, but not good enough for the Cubs. After the 2016 season, Darvill wanted to hit better and run faster and that’s what he and Hebert worked on during the winter of 2017.

“He wanted to add bat speed and to do that we added horsepower at the moment of truth,” said Hebert. “We worked on every single part of his swing from his big toe to the top of his shoulders. He hit the ball last year, he just didn’t hit it hard enough. We added miles per hour to his swing with the use of video, by making him stronger and giving him better rotation in his hips. We also changed his stance in order to give him a few extra milliseconds to determine the speed and trajectory of the pitch.

“Then we worked on his speed. We made him quicker on the base paths. I have hours and hours of footage of the work we did.”

“I’m very happy that Wes is getting this opportunity with the Dodgers,” said Goldeyes’ manager Rick Forney in a written statement. “Wes works extremely hard day-in and day-out and was a great teammate. We wish him all the best.”

Darvill, who struggled to hit in his first year, never had a problem in the field and is probably the best defensive third baseman in Goldeyes history. He was also thrilled to have had the opportunity to play in Winnipeg for the past two championship seasons.

“I want to thank the Winnipeg Goldeyes for everything over the past two seasons, and for helping me receive the chance to win a roster spot with the Dodgers,” Darvill said in a written statement. “Thank you to Rick and Tom (Vaeth) for giving me the opportunity to continue my career and to improve as a player. Thanks to all of my teammates, especially the veterans, for creating a positive and fun environment in the clubhouse. I especially want to thank the fans for making Winnipeg such an incredible place to play. The championships the last two years have been amazing memories, and we couldn’t have done it without your support.”