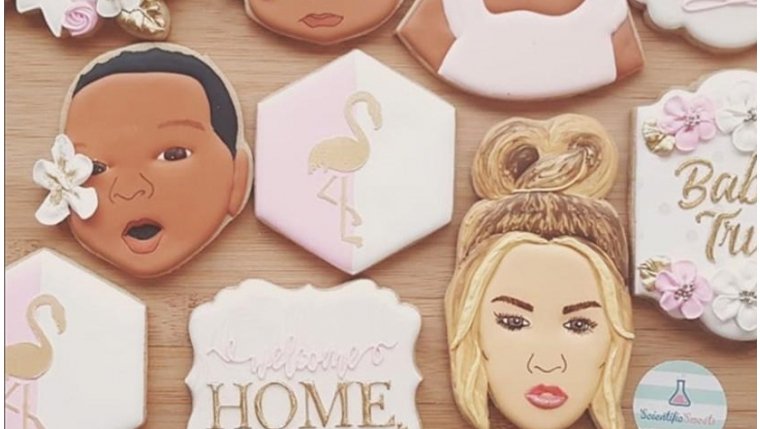 The famous Kardashian posted a photo of the custom−order cookies made by Winnipeg’s Scientific Sweets on Instagram.

"I have never seen cuter cookies in all my life," Kardashian proclaimed in a video showcasing the cookies on social media.

Scientific Sweets was created by Jenn Strauman and Mary Lou Vendivil a couple of years ago. Both work as laboratory technicians in a Winnipeg hospital.

When they discovered they had a mutual love of baking, they started making their signature portrait sugar cookies for custom orders and to sell locally at markets.

Last week, they received an email from someone claiming to be Kardashian’s assistant who spotted the duo’s work on Instagram.

"At first we thought it was a joke. It can’t be legit," Strauman said with a laugh. "So we did some fact−checking and it turned out to be legit."

"We couldn’t say no. It’s the Kardashians. How can you not do it?" Vendivil added.

Kardashian and two−month−old True were heading back to Los Angeles for the first time since the baby’s birth in April. There needed to be very special cookies for the occasion.

The Manitoba bakers and the assistant decided to go with a theme of pink, white and flamingos. The portrait cookies were also on order.

After final touches of gold lettering and pink flowers were added, the cookies were shipped south where they became a big hit in the Kardashian home on the weekend.

"Oh my God, my little baby," Kardashian says in the video as she zooms in on the cookies.

The two bakers were very excited when they saw their cookies on the celebrity’s Instagram account. Vendivil said she screamed so loud her husband was concerned something bad was happening. Strauman, who was at a store, started jumping.

"We are just hobby bakers in Winnipeg and for them, our cookies, to land in a celebrity’s house is just insane," Vendivil said.

While they don’t plan on quitting their day jobs just yet — Scientific Sweets currently isn’t taking any other custom orders — Strauman and Vendivil say they’d happily get their aprons on right away if another certain celebrity happened to call.

"If Adam Levine asked for cookies today, I would have them tomorrow," Strauman said.