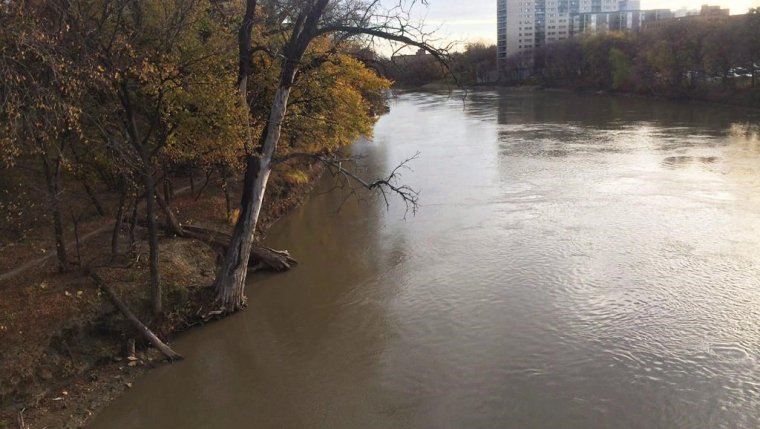 That’s because he doesn’t want to risk gliding through the sewage that regularly makes its way into Winnipeg’s river system.

The sewage dumps are a black mark on the city’s reputation, said Danyluk.

"It’s pretty embarrassing. If a child fouls a pool, a buzzer rings and everyone takes off. And here, it’s a shrug from the city."

Some 3.2 million litres of raw sewage and rainfall runoff spilled into Winnipeg’s river system last month but the incident was unusual only in scope.

The amount — more than an Olympic−sized swimming pool — was one of the largest spills in years, but was one of about 20 such events that occur each year.

The city is planning to spend more than $1 billion and take more than two decades to greatly reduce such spills, although they will not be completely eliminated.

Winnipeg’s problem stems from old infrastructure. About a third of the city relies on a combined sewer system — pipes that collect both raw sewage and runoff from rainfall or melting snow.

The combined water is sent to a sewage treatment plant nearly all the time, but in periods of very heavy rain it goes directly into the rivers.

They system was designed that way decades ago to avoid overwhelming the treatment plant and to reduce the likelihood of basement flooding.

The city is working on a 27−year plan to greatly reduce the number of combined sewer overflows.

It would cost $4 billion to replace all the combined sewers, so the city is relying on a variety of measures to keep the cost down.

"We’re hoping to do some work with what they call green infrastructure — you know, you repave a back alley in a certain way so that it slows the drainage of (storm) water into the system," said Brian Mayes, a city councillor who chairs the city’s water and waste committee.

"Sewer items never really grab the public’s attention the way potholes do, or crime, but I think increasingly people are commenting on it and they’re concerned."

The city points out that the overflow amounts are a very small fraction of the water that’s captured and treated each year.

The Lake Winnipeg Foundation, a non−profit group dedicated to protecting the large body of water into which Winnipeg’s rivers flow, says the sewage−spill issue is small compared to problems such as phosphorus.

Phosphorus from sources that include wastewater can choke oxygen from lakes and promote the growth of algae blooms.

The city is also tackling that issue over the long−term by upgrading one of its major sewage treatment plants to remove phosphorus.

Danyluk agrees phosphorus is a bigger problem but he said the raw−sewage overflows should be a no−brainer.

He said politicians and the public might have made fixing the problem a higher priority long ago, if not for the fact that Winnipeg takes its drinking water from a lake 150 kilometres away in a community straddling the Ontario boundary.

"If we weren’t importing water from another province, I think we’d be a lot more concerned about our discharges."