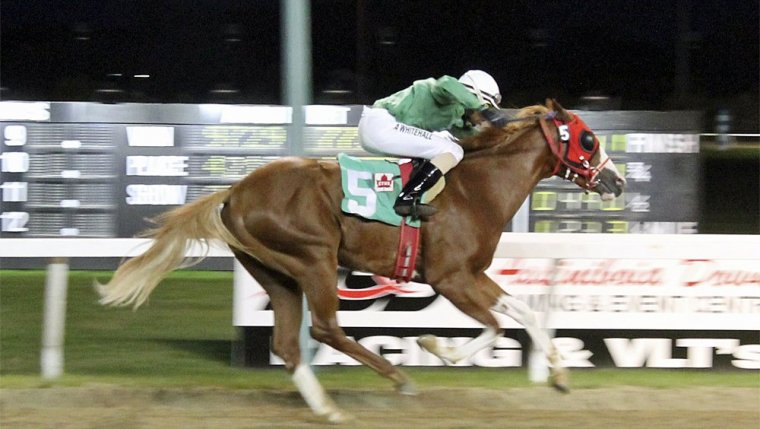 WINNIPEG - It was a great Father’s Day for Antonio Whitehall.

The 24-year-old jockey from Barbados fired a hat-trick on Sunday as he won his 13th, 14th and 15th races of the season at Assiniboia Downs and took over the jockey lead from Adolfo Morales.

Whitehall, who won two legs of the Barbados Triple Crown in 2014, started quickly on Sunday afternoon. He won Race 2 on Stevie Mac for trainer Shelley Brown, beating Tadaa with Rohan Singh aboard.

He won Race 3 aboard Langara for trainer Don Schnell and owners Barry Arnason and True North and then won Race 5 on Phenomenal Phoenix for trainer Jerry Gourneau and the Gourneau Brothers.

It was a tremendous afternoon of racing for Whitehall and capped a brilliant three-day effort. Last Wednesday, Whitehall had two wins, a second and a third in seven races. On Saturday, he had two third-place finishes in seven races and on Sunday, he had three win and two second-place finishes. He was very close to a five-win afternoon. In total, he had five wins, three seconds and four thirds in three days of racing.

It has been a brilliant week for Whitehall who has four mounts on Wednesday night, including the favorite, Open Hand, in Race 3. If you bet jockeys, betting Whitehall is a good decision these days.

Things are heating up at the Downs and after 15 days of racing, we are in the midst of one of the most competitive seasons of racing in more than a decade.

While the Red River Exhibition is on, right next door to the Downs, remember to use the Saskatchewan Ave., back entrance to the track. Access Saskatchewan via Cavalier Drive or Buchanan Boulevard off Portage Ave. If you’re driving west down Saskatchewan Ave. from Sturgeon Road you will have to take a detour down Hamilton Avenue because a part of Saskatchewan Avenue is closed during the reconstruction of a bridge over Sturgeon Creek. Got all that? I know, it can be confusing, but it will be a problem until next Sunday.