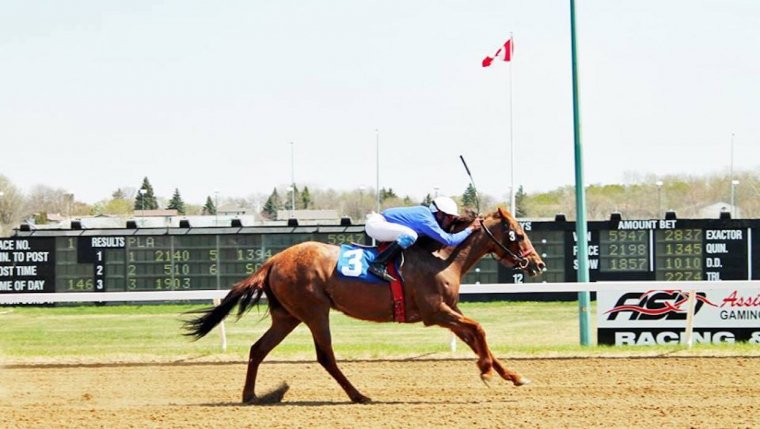 WINNIPEG - Last year’s runner-up in the Assiniboia Downs jockey standings had an interesting, if not semi-successful Opening Day at the track on Sunday.

Granted, Adolfo Morales didn’t pick up a win, but on Day 1, he finished second once and third twice as he ended up in the money in three of his four races. Of course, he was dead last in Race 3 on a horse, Papa Al, that was a morning-line favorite.

Ahh, the beauty of thoroughbred racing.

every one of the seven races was won by a different trainer, different jockey and different owners -- a rarity – a couple of names popped out.

First of all, and just for the record, Thisladyisadiamond, owned by Karen Bjarnason, trained by defending trainer’s champion Tom Gardipy Jr. and ridden by Richard Mairs, won the first race of the 2018 live meet.

Newcomer, Domingo Chacaltana, a Peruvian rider who makes his full-time home in Dallas, had a tremendous Opening Day. In Race 2, he brought Zar’s Star home in second spot; in Race 5, he rode Unreal Deal to third place; and in Race 6, he won aboard Starship Mischief.

Paul Francis also had a great opening day. The farmer/jockey from Jamaica, had a win, two seconds and a third and won $13,100 for his owners. Officially, Francis is the leading jockey after Day 1.

This year’s opener was also a day with more than one rarity.

When four-year-old filly Joyful Glow shook loose from her handlers before the first race and romped twice around the track before being corralled by outriders, it gave the fans a laugh and her owner a few anxious moments. That little trip resulted in Joyful Glow being added to a list of five total scratches in the first two races. Both events were rare at Assiniboia Downs, even early in the season.

“It was a bit of an adventure with the unfortunate early scratches and our loose horse,” said CEO Darren Dunn. “But it was hard not to be buoyed by more than 7,000 enthusiastic fans enjoying the return to racing under crystal blue skies.”

Horses from Nebraska, Arizona, Florida, Minnesota, Ontario and Alberta competed for purses ranging from $7,500 to $14,000. The biggest win price of the afternoon came in the last race when Candy Giant, a three-year-old colt that had been racing at Turf Paradise in Arizona, exploded from the field of 10 horses to pay $27.60 for a $2 win ticket. A 20-cent superfecta ticket with the first four horses in the correct order paid a whopping $1,770.

Live racing resumes again on Friday and Saturday, May 18 and 19, at 7:15 and Victoria Day Monday at 1:15 p.m. It’s going to be an exciting weekend of live racing.