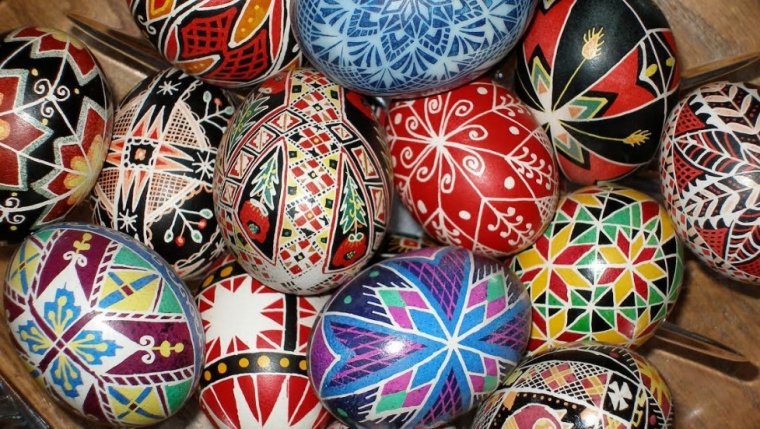 WINNIPEG - As people across the province prepare to celebrate Easter, many, because of Manitoba’s rich Ukrainian history, will enjoy the centuries old art of making pysanky - a beautiful technique for decorating Easter eggs. The name comes from the verb pysty - “to write” - with a single “written-on” egg called a pysanka.

It’s been 130 years since the first Ukrainian settlers arrived in Canada, and since then tens of thousands of Ukrainians settled in the prairies where they obtained land to farm in three waves up until the 1950s. The communities that grew from this migration have left their mark in many ways, including the construction of the world’s largest traditionally-decorated pysanka in 1975 in Vegreville, Alberta, weighing about 5000 lbs., nearly 26 ft. long and 18 ft. wide, and standing 31 ft. high. The town still holds an Annual Pysanka Festival.

The first Ukrainian church in Canada was built in 1897 at Gardenton, Manitoba, a village that’s now home to a Ukrainian Museum and an annual Ukrainian Festival. Making Pysanky is a staple of Ukrainian Easter celebration, with the eggs decorating a basket of Easter meal ingredients brought to Orthodox churches to be blessed on the Sunday before Easter.

To make your own pysanky, you’ll need a pencil; a candle; some wax and a funnel to pour hot wax with; a small ladle or spoon; containers for different colours of dye; and newspaper, rags, paper towel, or an old tablecloth. If you’d like to make a pysanka closer in size to the one in Vegreville, you may want to try to get your hands ostrich egg.

You can learn how to make traditional, authentic designs with the help of an expert or an organization like the Ukrainian Cultural and Educational Centre, but if you’d like to dip your feet into the basic method, you can draw your own design to try.

If kids are helping, this process will need adult supervision. It’s best to lay out something to catch any dye that might drop onto the table. Start by gently drawing your design on the egg. If there’s a part of the egg that you don’t want a particular colour of dye to cover, you’ll cover it with the beeswax. Heat the wax until it’s liquid, and use the funnel to draw the wax onto the parts of your design where you won’t want the dye to stick. Traditional pysanky artists use a small copper funnel called a kistka to pour the wax onto the egg.

Any parts of the egg that you want to remain that first colour or stay dyeless get another coating of beeswax, and the egg gets lowered into the container of whatever dye is darker. Repeat the process of “wax on, dye, and dry” until you reach the darkest dye colour.

To remove the beeswax, you hold the egg over the candle flame - but not too closely. When the wax is melted on part of the egg, you can wipe it off, wait for the shell to cool, and rotate the egg to move on to the next area. Once all the wax is removed, you’re left with a pysanka.