Trainer Juan Pablo Silva is in Winnipeg to win 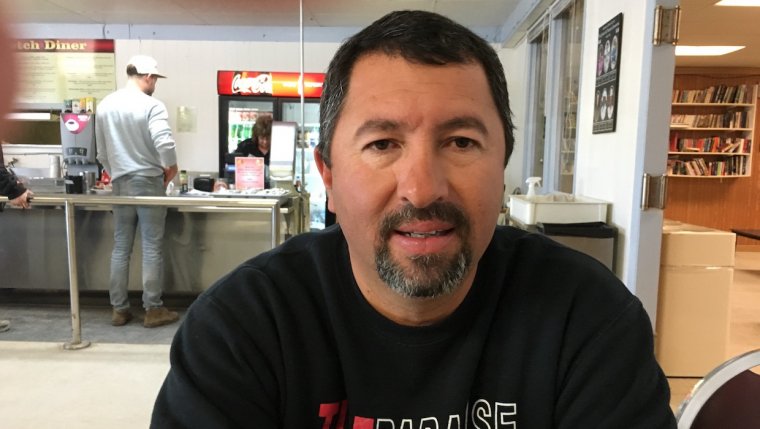 As wonderful as the city might be, Silva is a veteran thoroughbred racing trainer from Turf Paradise in Phoenix, who came to Winnipeg with 17 horses in his stable and one goal in mind – to win horse races.

“Yeah, I’m here to win,” said Silva, who grew up in the family horse racing business at Golden Gate Field in San Francisco. “I could have gone to other tracks for the summer, but I thought my horses would have the best chance to win here.”

Silva was 13 when he left school and went to work for his father, Jose.

“He taught me the business and taught how to work,” said Juan, who had two winners on Wednesday night’s card at Assiniboia Downs. “He taught me responsibility and he taught me how to be successful on my own.”

Then in Race 7, his red-hot sure thing, Hot Rodin, with Renaldo Cumberbatch aboard, won his third straight race, this time by 2 ½ lengths over Tyrone Nelson and Defondo. Sadly, for Silva, Hot Rodin was claimed for $7,500 by Larry Cizik, the 10th horse Silva has had claimed this season.

Those two wins solidified his spot in fourth place in the trainer’s standings at the Downs. Silva now has nine wins, six seconds and nine thirds in 37 starts. He’s 10 wins behind trainer standings’ leader Jerry Gourneau and while Silva would like to be the trainers’ champion this season, he isn’t sure he has enough horses in the barn.

“I wish, I hope I could win the championship,” said Silva, whose Tijuana Racing Stable was the leading owner at Turf Paradise last winner. “I don’t think I have enough horses to do that. There are other trainers with 50-60 horses. I have 10-20, but I had seven claimed in the first month.

“But if they claim more, I’ll bring more. I have good connections, my dad, Jose, is in Albuquerque, New Mexico, my brother, Jose Jr., is in Canterbury and my cousin, Miguel, is in Canterbury. This is a family business. Miguel has another 50 horses at Canterbury so I have good connections to get horses. I would have more if I could get more help. There just aren’t enough grooms. It’s hard to bring in more horses, I would have 20 or 30, if I could more help.

“I have both of my sons working for me, Juan Pablo Jr., is 12, and Miguel is eight. And my wife Yesenia works with me, too. I couldn’t do this without her.”

Silva now has 182 lifetime wins, 155 seconds and 166 thirds in 1,131 starts. After a slow start, he’s starting to find his groove – although his horses are still being claimed.

“The first two weeks, I had bad luck,” he said. “It was a three-day journey from Phoenix and then it was really cold. It took the horses a while to get accustomed to the weather and get their legs back from the long trip. I think later in the year, they will all run better.”

Meanwhile, on the trainers’ side of the ledger, with a win on Wednesday night, Jerry Gourneau continues to lead with 19 wins and $165,620 in earnings in 109 starts. Defending champion Tom Gardipy Jr., is next with 11 wins and $109,869 in earnings in 96 starts. And Don Schnell is next with only 29 starts, 11 wins (seven seconds and a third and has finished in the money in almost 70 per cent of his races) and $101,948 in winnings. And Silva is gaining in fourth with nine wins in 37 starts (two wins in two starts on Wednesday) and $81,955 in earnings.

There is no racing on Friday night this week, but don’t forget, on Fridays, Saturdays and Sundays, the free VLT tournaments continue, starting at 8 p.m. each night. You can get into the draw for 10 chances to win $20 in free VLT spins. The top winner from each night participates in a month-end finale for more spins and $250 in prize money.

Remember, live racing this week is on both Saturday and Sunday, with 7:15 post parades on both nights. Yes, it’s a special Sunday night of racing this weekend. As well, the 159th running of the Queen’s Plate will go to post at about 4:36 p.m. CST at Woodbine Race Track in Toronto. The favourite is Telekinesis with Patrick Husbands aboard at 5-2. Winnipeg’s Chantal Sutherland will ride Inge, an Ontario-bred going off at 30-1.

You can wager on the Queen’s Plate – and four other stakes races at Woodbine – right here in Winnipeg at Assiniboia Downs.