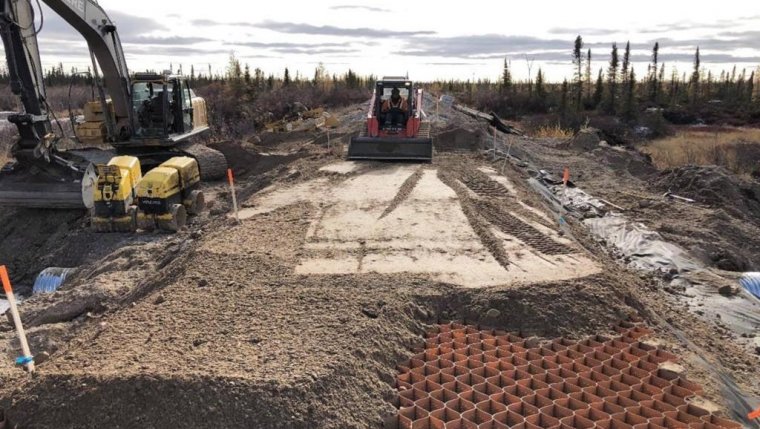 CHURCHILL — The new owner of the railway to Churchill, says washouts that have kept the line closed since spring 2017 have now been repaired, allowing some vehicles to travel along the link.

But the Arctic Gateway Group, which bought the railway from the previous owner at the end of August, warns in a series of Facebook posts that culvert and rail repairs still need to be done, as well as safety testing.

It says the work could mean regular rail service might not resume until spring.

Crews have been working since the sale to try to repair the railway, which is the only land link to Churchill — a community of about 900 people on the western shore of Hudson Bay known for its polar bear visitors.

The town posted a statement on its website Sunday where it says hi−rail trucks — which can operate on both roads and rails — are preparing to arrive in the town this week.

It calls the news "a milestone" and credits the efforts of the repair crews.

"The dedicated work by experts, in difficult working conditions, has been very impressive," the statement read.

Arctic Gateway Group has posted regular updates, with photos, of its work to repair to the line, which has continued despite deteriorating weather that has included rain, sleet and now snow.

"While you may start to see crews in and around Churchill as the track becomes passable to service vehicles, this does not signal that the work is done. It means the first repairs of washouts are done," Murad Al−Katib of AGT Food and Ingredients Inc., one of the partners in Arctic Gateway Group, said in a Facebook post last week.

"Take the time to thank the crews. We truly appreciate all of the support that we have received so far, and look forward to completing the repairs as soon as possible."

The community has been forced to ship in fuel and food at exorbitant costs since the tracks were damaged in May 2017, leading to a protracted fight after then−owner Omnitrax said it would not be financially viable to fix them.

The impasse was resolved when the federal government announced the sale of the rail line, along with the Port of Churchill and the Churchill Marine Tank Farm, to a partnership including a consortium of First Nations. Ottawa agreed to provide at least $117 million in the deal, including $43 million over 10 years to subsidize the rail line’s operations.

The repair effort suffered a potential setback last month after a derailment south of the damaged track killed one railway worker and seriously injured another. Al−Katib said at the time that the derailment might block track ballast from reaching the scene, and staff may have to halt repairs in order to fix the recent damage.

A Transportation Safety Board investigator has said beavers may have contributed to the derailment, which occurred at a washed−out trestle bridge in a swampy area south of Thompson, Man. on Sept. 16.

"We will vigilantly continue the remaining works as quickly as possible, with our minds on the safety our workforce and the operations of our railway," Al−Katib said on Facebook this week.