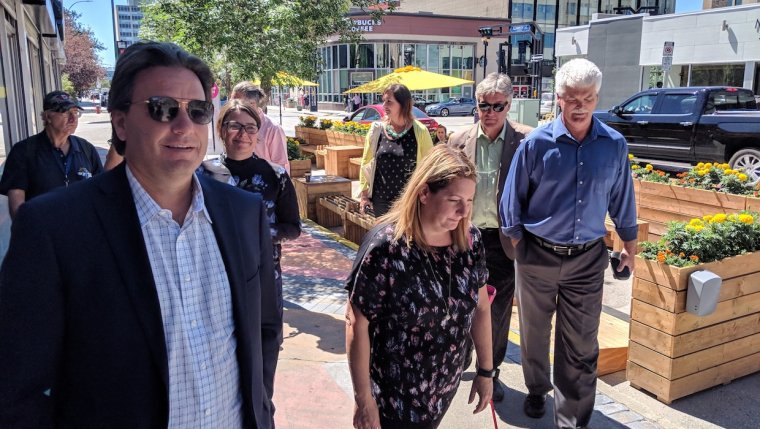 Members of City Council and other stakeholders had a chance to engage on an interactive tour today of downtown Winnipeg’s Pop-ups. The tour included Pop-up Parks at Portage and Hargrave as well as Graham and Kennedy. It also included our Pop-up Toilet that is now in its second location of a four-destination plan.

“We want Councillors to know what we are doing so that when they discuss all the amazing things that are happening downtown they can add these to their list and speak with knowledge on the topics. We want them to understand the value of these assets and offer them a glimpse of what permanent additions like these could look like,” said Downtown Winnipeg BIZ CEO Stefano Grande.

The tour while casual was very interactive and all involved had the chance to ask questions and share their impressions and suggestions of the Pop-ups and how we could improve upon them.

The Pop-up Parks couldn’t have happened without Manitoba Institute of Trades and Technology students from their YouthBuild program. They build the parks in the winter and assembled them in late spring. Their beauty is a testament to the institute and its talented students.

The Pop-up Toilet was the brainchild of Wins Bridgman of BridgmanCollaborative Architecture and is supported by Siloam Mission who supply the staff to keep the Toilet clean, safe and monitored. The results of early success from our first location were shared with councillors and stakeholders as well.