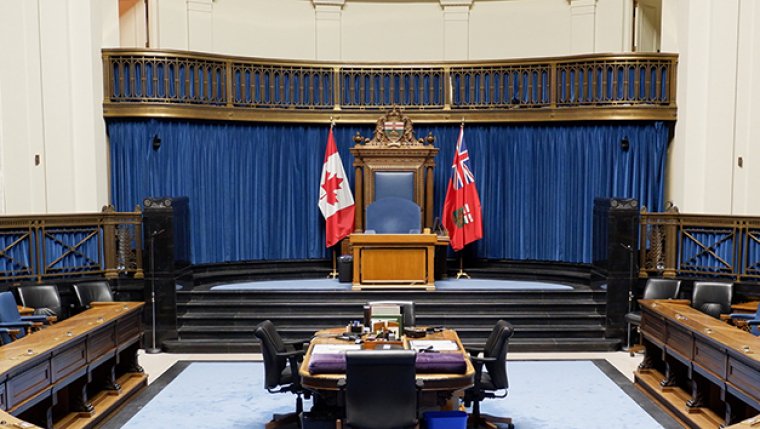 WINNIPEG - The provincial government unveiled a 28-page “protecting Manitobans agenda” in today's throne speech, kicking off the third session of Manitoba's 42nd Legislative Assembly. The speech was delivered by Lieutenant Governor Janice Filmon, with only half of Manitoba’s MLAs in attendance to comply with COVID-19 regulations around physical distancing.

Included in the 12-month plan is a phased elimination of the $830 million-per year education property tax to start in 2021. Meanwhile, the government is also seeking to reform the education system to make it more efficient.

The Province also outlined a vision to reform Employment and Income Assistance to help struggling Manitobans get back on their feet. Families Minister Heather Stefanson is tasked with an overhaul of the program that would have it provide a “short-term bridge to meaningful employment.”

As global demand for grain and other staples that are moved across the country by train surges during the COVID-19 pandemic, new provincial laws are also in the works to deter blockades of transportation infrastructure. With the pandemic cutting into Manitoba’s pocketbooks, the government is also instructing Manitoba Hydro to increase electricity rates by less than three per cent. Pallister is also promising to enact legislation to provide paid sick leave to those impacted by COVID-19.

The government also plans investments in water sustainability and natural infrastructure projects, with the development of a provincial water strategy, and liquor sale by businesses to bring prices down.

Several of the items on the agenda the province had already committed to in the past, including an income support program for Manitobans with disabilities and lifting some restrictions on Sunday and holiday shopping.

In a gesture of reconciliation, Filmon also released plans to commission a statue of Chief Peguis on the legislature grounds, commemorating the 200th anniversary of the treaty led by the chief, signed with Lord Selkirk at Fort Douglas, near what is known as Waterfront Drive.