The Strike for Freedom: From 1919 to Here 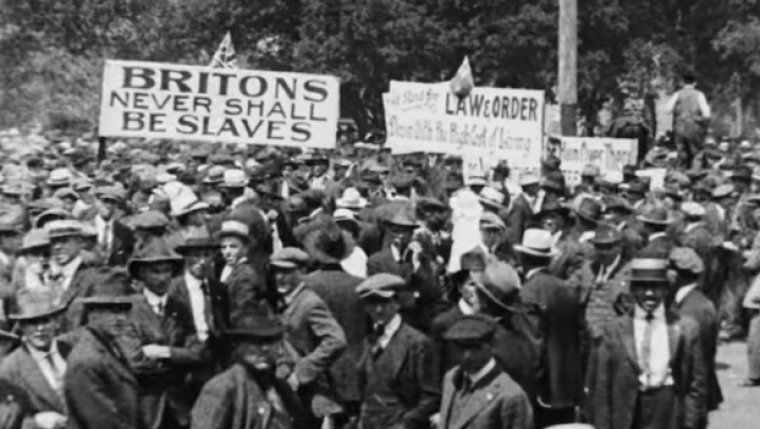 It is human nature to want to be free. We may all want freedom, but paradoxically, freedom has never been free. It was hard earned with blood, sweat and lives - millions of lives.

It was not so long ago that work and employment were questions of freedom. Throughout history, men and women who worked for others were not always workers and employees. They were property. Serfs and slaves. Even the modern legal definition of the relationship included the terms master and servant. The relationship was more about control than economic exchange. The present-day rights we enjoy in many developed economies evolved.

On May 15, 1919, over 30,000 Winnipeg workers walked off the job. The General Strike was an essential stop along this evolutionary road. When the union and mostly non-union workers walked off the job a century ago, they carried the aspirations of an entire generation on their shoulders. This action was and still is the largest single strike in the history of Canada. They took on the political and economic establishments. They hoped for a quiet revolution but were instead treated as revolutionaries seeking to destroy the social and political order.

At the turn of the last century, Canada was changing, and as it grew, the source of its new citizens was also changing. Nowhere was this change more evident than in Winnipeg. With the change, came tension between new and old and also a natural inclination to blame. Even though new Canadians and old faced the same economic distress, they did not always unite in a common purpose.

When they did unite in solidarity to launch the General Strike, their resolve was eventually broken by those who feared change and accused the agitators of fomenting revolution. The strikebreakers included the political and economic elite as well as ordinary citizens who saw the strikers more as interlopers than as advocates for necessary change. With the benefit of time, we can see the strikers were on the right side of history and their fellow citizens who opposed them at the time, also benefitted from the change prompted by the strike.

Evolution and revolution are separated by one single letter. The strikers had hoped for the latter only peacefully; a cathartic mass action that would change the intolerable conditions, poor wages, long hours and unaffordable price hikes faced by workers at the hands of many oppressive employers.

Their stand for freedom and fairness exacted a price. When the establishment struck back on June 24, 1919, dozens were arrested, many were injured and two died as a private police force accompanied by the mounted police charged a peaceful demonstration with wooden bats and guns.

They wanted revolutionary change. However, the strikers set in motion a slow evolution in attitudes and laws that ultimately yielded the best of Canada we hold dear. We can draw a straight line between modern labour laws, pensions, public healthcare and Canada’s social framework back to 1919.

A hundred years later, it is becoming clear that freedoms, as hard-earned as they may be, are not permanent. What was painstakingly gained can be effortlessly lost. The social and economic turmoil of 2019 invokes a sense of familiarity. In 1919, there was economic distress, a loss of hope, a fear of change, and a fear of others who were coming to Canada to displace those who had come before.

In 2019, there is social tension prompted by similar stressors and fears. Stagnant wages, job losses, unaffordable housing and immigration are once again pitting Canadians against each other. Moreover, across the world, governments are considering or enacting laws that would dismantle labour hard-earned protections and economic rights of workers.

In 1919, even though 30,000 workers joined the picket line, other workers remained silent, and some even helped break the strike. In 2019, many Canadian workers are making “others” the scapegoats for the economic conditions they are facing. Despite 100 years of retrospection, we are repeating the mistakes our predecessors did in 1919. It seems we have yet to learn history’s lessons fully.

However, it does not have to be so. We don’t have to repeat the same patterns and relive the same disorder to defend what 30,000 strikers sacrificed so much to secure for their successors. We need to remember our history and collectively resolve to accept no retreat on our rights. Doing that requires us to exercise our right to vote for those who understand and respect history’s gains.

That simple act respects both the legacy of those who sacrificed and ensures we pass on this legacy to our successor generations. It’s the least we can do for the freedoms we have enjoyed. Let that be our revolution.