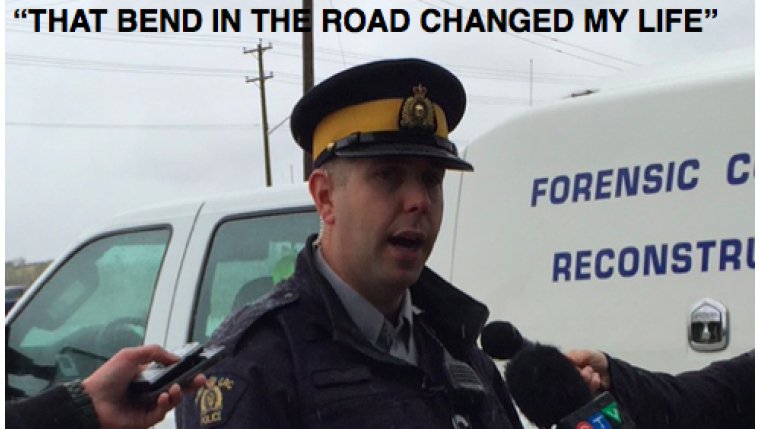 WINNIPEG – On February 14, 2018, just before 5:30 pm, Cst. Adam Reid of the Minnedosa RCMP was driving southbound on Highway 10 when he noticed that road conditions were starting to deteriorate and roads were becoming icy.

“As we rounded the second bend south of town, I observed snow kick up from the shoulder of the northbound lane,” said Cst. Reid. “Then, all of a sudden, a vehicle was in my lane. I was on the brakes immediately and was able to slow down significantly. The northbound vehicle struck the car right in front of me and started to roll. It came right toward the police car and it hit us. Both my partner and I watched it unfold in slow motion.”

Cst. Reid and his partner exited the police car and rushed to offer assistance to the occupants of the five other vehicles involved in the collision. Help was on the way – more police officers, Emergency Medical Services and the fire department.

“Three people died that night,” said Cst. Reid. “When I got out of the car, the first person I checked on was deceased. It all happened so quickly. As a police officer, I’ve responded to serious collisions, and I’m trained for that. I’m prepared for that, but this time, I was a part of it. That bend in the road changed my life.”

For Cst. Reid, the experience of this collision really brought home the idea of always being mindful of the other vehicles on the road and your own reaction time.

“I was able to react and hit the brakes,” he said. “My story would be a lot different if I hadn’t reacted when I did.”

Cst. Reid is sharing his story today because it is important that drivers realize the messages the police put out and the statistics the public is bombarded with regarding collisions apply to them. It takes one second for everything to change, for lives to be lost. Be mindful. Slow down. Buckle up. Drive sober – for everyone’s sake.

This year, 31 people have died in collisions in RCMP jurisdiction. Last year at this time, there were 12 fatalities and the five-year average (2013-2017) is 16 deaths. During May long weekend of 2017, two people died and seven others were hospitalized due to serious injuries. All nine of those people were killed or injured by an impaired driver. Three out of those nine people were not wearing a seatbelt.

These numbers and Cst. Reid’s story are not being shared to scare anyone. They are being shared to make everyone aware. There will be enhanced enforcement over the May long weekend in an attempt to catch high-risk drivers before we lose another life.