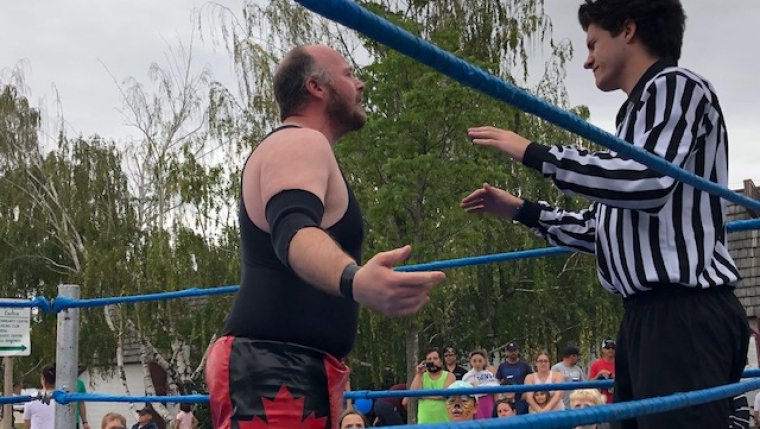 ARBORG - Every August, the action and excitement of CWE Wrestling highlights the Saturday afternoon festivities at the Arborg Street Festival, and this weekend a strong crowd of 300 cheered and booed loudly and constantly as the card unfolded.

The opener was yet another comeuppance for “The King Of Transcona” Scott Ripley. Despite the nefarious efforts of manager Coach Kelly Russell and some uneven officiating by young Roy Cheeks, the international star MENTALLO out-grappled and out-muscled Ripley to finally score a submission victory with the camel clutch. 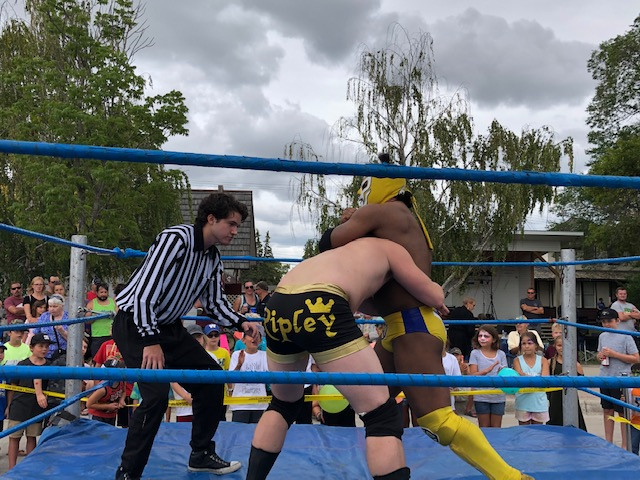 One reason why on-location Manitoba wrestling is part of our cultural milieu is the lasting memories the cards create for kids of all ages. The insults of the dastardly Dragneel resulted in exhortations by the fans for Cyber Sam Davidson to stifle him. Ten minutes later Davidson took the three count for a very popular - and memorable- victory with the younger set. 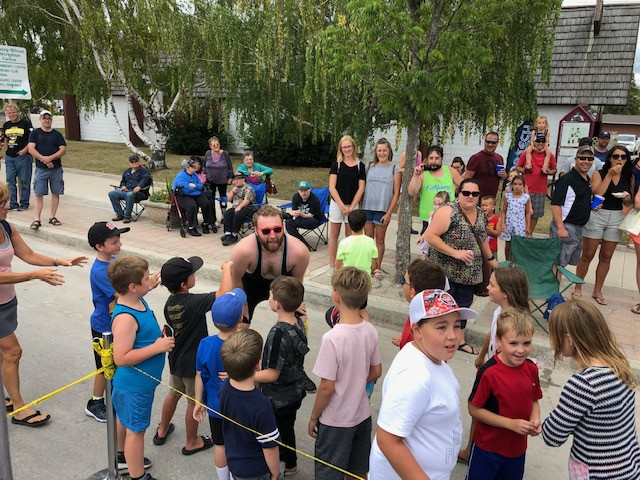 Former Tag Team partners faced off and the crowd were shocked when Wildman Firpo jumped Tod Bullet before the bell rang. The assault continued until Bullet’s sleeperhold evened the battle. Referee Mike Wiseman caught Firpo using the ropes to try a winning pin, but missed when the clever Bullet resorted to the same tactic in response and scored a pinfall, as The House of Hoopla rejoiced. 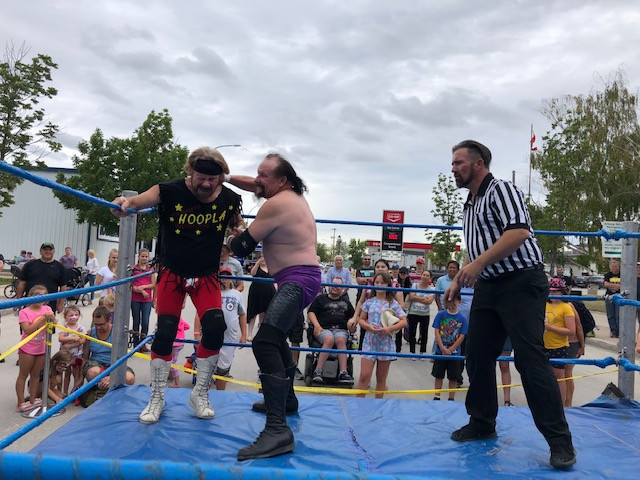 When Big Bobby Schink was recruited to the Cannon Corporation a big bad attitude emerged and it was on full display to the fans. ‘Canadian Strongstyle’ Rob Stardom, who was unceremoniously replaced in the organization by Schink, was eager to cut him down to size. However from the outset it was apparent to Stardom - and everyone- the playing field was not on the level. 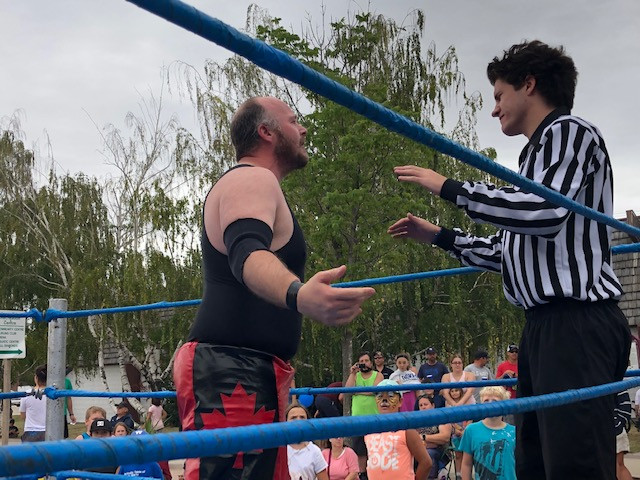 After 5 minutes a rapid fire count to 3 by Cheeks was followed by Schink and the biased official raining kicks and punches on the startled Stardom. Having already suspected Cheeks was not on the up and up, a nearby MENTALLO rushed the ring to even the odds and Stardom’s challenge to a Tag Team match was pronounced. 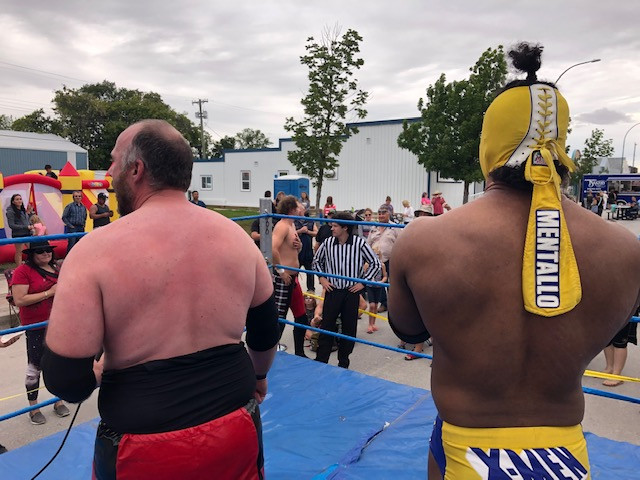 Both fan favourites went on the offence and displayed the punishing maneuvers they’ve learned in tours of Japan and Mexico. MENTALLO took particular pleasure in displaying the expensive dental work Cheek’s parents had invested in. 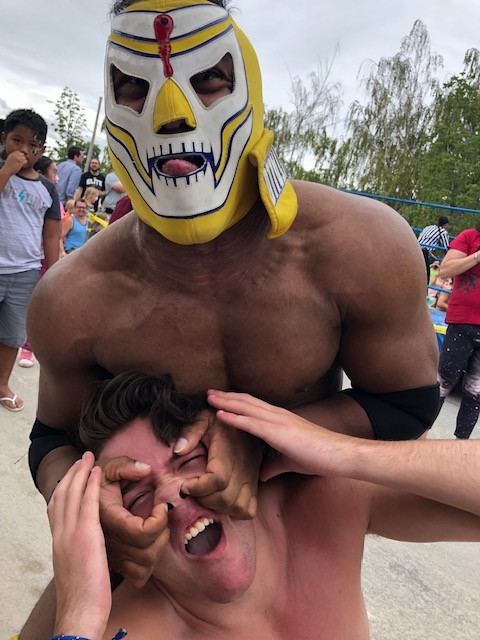 The wily veterans pummelled the overmatched greenhorns up and down the street and sandwich boards, hockey sticks and commode doors were utilized as devices of brutal retribution. Soon after Cheeks was flattened and covered by Stardom to score a decisive decision, sending the fans off with more great memories yet again from the annual summer visit by Canadian Wrestling’s Elite. 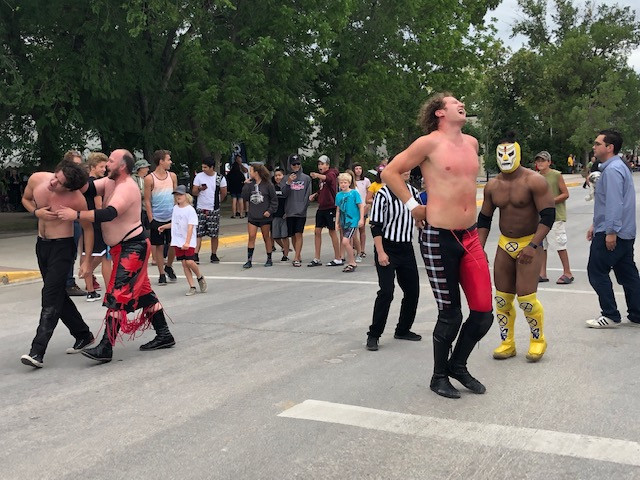 { Marty Gold has worked in the professional wrestling game as a producer, broadcaster, performer and historian since 1980. To support his ongoing, unique news and sports reporting, you can chip in via https://www.paypal.me/MartyGoldMedia}