Springtime is Snake Time in the InterLake 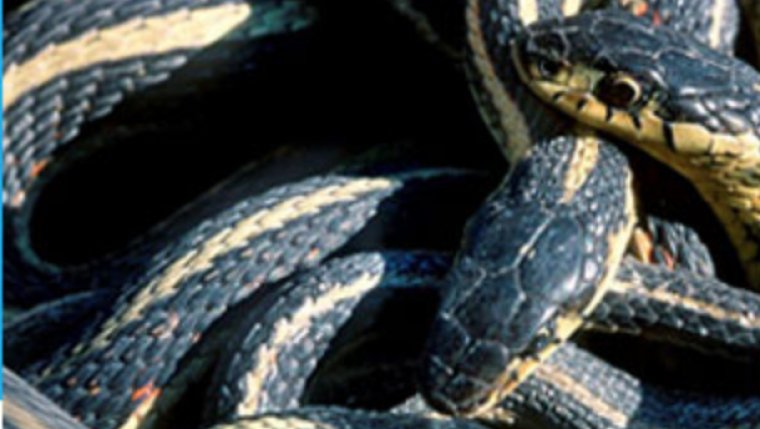 Spring brings with it a newness, a freshness, that breath of fresh air that sweeps away those winter cobwebs. Along with the change in temperature, the longer days with more sunshine and the newness of the world comes mating season. It's a time where the majority of species challenge the life cycle once more!

Mating season in the Interlake sees a return of thousands of birds from the warmer climes of the south to make their nests, to lay their eggs and to wait patiently for the hatching to begin. Animals come out of their dens; the bigger ones like bears come out hungry, moose and deer appear out of the forests and the red-sided garter snakes slither out of the frozen limestone dens that have held them captive during hibernation.

There can be tens of thousands of snakes in each den or hibemaculum over each winter. In the late 1800’s it was the “fashionable” thing to do- to drive out to the Stony Mountain dens and picnic while watching the snakes emerge from their winter hibernation. In fact, the first strike of prisoners at the Penitentiary occurred at the Stony Mountain Quarry as they feared working around the enormous amount of Red-sided garter snakes creeping out of the crevices in spring.

It’s a phenomena found at the Narcisse Snake Dens in the heart of the Interlake. The males appear first, as soon as the rays of sun start to heat the limestone and thaw the ice from the crevices in the underground dens. Thousands of male red-sided garter snakes come out to sun themselves, stretching and wriggling over dead branches, decayed leaves and onto the rocks above the frost line.

Days later, come the females, sluggish from their long months in cold storage. The females are larger, emerging slowly into the sunshine to soon be surrounded by masses of males. From the female, the scent of pheromones is released, spurring the males to circle around her, to chase her, and to form “mating balls” around her.

These “mating balls” are comprised of one or more mature females along with hundreds of males vying for attention and an opportunity to be the mate she selects to impregnate her. They crawl over her, under her, and wrap around her, showing themselves off to her. It’s a mystery to us to know what makes her decide which male will be the one!

Prime time for snake viewing at the dens is Mother’s Day. The sun has warmed the rocks and the soil sufficiently to signal the snakes to emerge. Depending on the weather, the spring snake viewing season lasts from late April to early June. There are several places to get updates on the snakes activity here is the Manitoba Conservation one: https://www.gov.mb.ca/sd/fish_and_wildlife/snakes_narcisse/index.html.

What you need to know for your visit

Wear good walking shoes. The paths are gravel with the longest route past all five dens being three 3km long. There are several shortcuts you can take to get back to the parking area. The paths are wheelchair accessible. There are benches for resting along the way. Bathrooms are accessible, outdoor, wooden ones. There are picnic benches near the parking lot, but no source of food or water on site. Visit on a sunny day for the best viewing.

You may pick up the snakes but be careful with them and return them carefully to the ground.

Check out the snake fences in the ditches along the way; they are to keep the snakes going into the tunnels under the road and preventing their deaths by vehicles if they were crossing the highway. You may still see some that have not made the correct choice.

Stop in Teulon or Inwood on the way from or returning to Winnipeg for a meal. Check out the S-sam & S-sara Snake statue at the Inwood Park. Capture a family photo. The grandkids will love this trip. Your kids may recall it from their youth and the entire family will have a day out enjoying the great outdoors together.