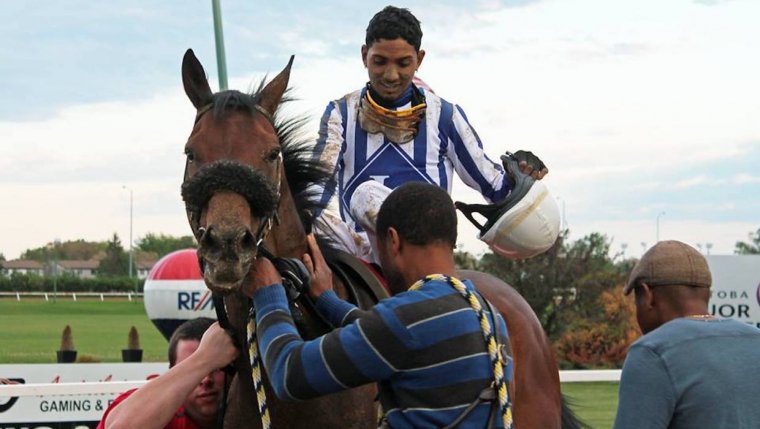 WINNIPEG - With the second week of Wednesday night racing just a couple of days away, the defending jockey champion has made his presence known and the best at the Downs are battling for the top of the charts.

After an exciting weekend of racing that included late-arriving 2017 jockey champion Rohan Singh’s first win of the year, a four-win weekend for Antonio Whitehall, three wins for Tyrone Nelson and two stakes races, the jockey standings are tight and the first big three-year-old race has produced an early front-runner for the Manitoba Derby.

After the racing cards on Friday and Saturday nights, Antonio Whitehall and Adolfo Morales are tied for first in the jockeys race. Whitehall, who won two races on the weekend, has 41 starts with nine wins, 13 seconds, two thirds and $92,757 in earnings. Morales has made 31 starts and has nine wins, six seconds, 10 thirds and $94,679 in winnings. Morales, who one once this weekend, has finished in the money in 25 of 31 races this season.

Meanwhile, Tyrone Nelson, who won twice on the weekend, has moved into third place all by himself with seven wins, two seconds and seven thirds in 35 starts. He’s won $67,341.

Now, in just 10 mounts so far this spring, Singh has a win, three seconds and three third-place finishes.

On Saturday night, Prayven Badrie rode the winner, Why So Blue, in the $25,000 Frank Arnason Sire Stakes for three-year-olds. Why So Blue is now a clear favourite for the Derby in August.

This week, there is live racing at the Downs on Wednesday, Friday and Saturday. And don’t forget, on Fridays, Saturdays and Sundays, the free VLT tournaments continue, starting at 8 p.m. each night. You can get into the draw for 10 chances to win $20 in free VLT spins. The top winner from each night participates in a month-end finale for more spins and $250 in prize money.