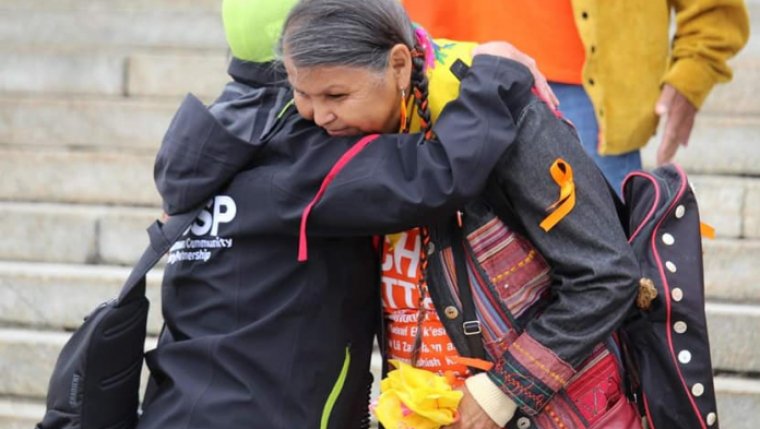 WINNIPEG - A group of Manitoba residential school survivors are on their way home after a journey to Kamloops, B.C. to offer support to a First Nation in mourning after the discovery of the unmarked graves of 215 Indigenous children on the site of an area residential school in May.

The team of survivors brought a sacred fire bundle to the Tk’emlúps te Secwépemc community at the former Kamloops Residential School this weekend after driving nearly 2,000 km. The trip there was an emotional one, as thoughts of the 751 graves also discovered near Cowessess First Nation flooded the minds of survivors while they travelled through Saskatchewan.

Participants say they offered their support, and shared stories of their experiences and moments of prayer. In the gifted bundle was medicine, a drum rattle, a star blanket, and ashes from a sacred fire that had burned at the Manitoba Legislature Building for several days, a symbol of healing in honour of the children buried at former residential school grounds.

On their way back to Manitoba, the group of survivors plans to stop at one of the 20 residential schools that once operated in Saskatchewan between 1820 and 1983. The group is expected to return home on Monday.

There were 17 residential schools and 114 day schools in Manitoba, and it’s estimated that at least 338 children died while attending them. Researchers are working to repatriate 104 students whose graves were found at one site where a school in Brandon had operated from 1895 to 1972.