Oil to Tidewater Through Manitoba 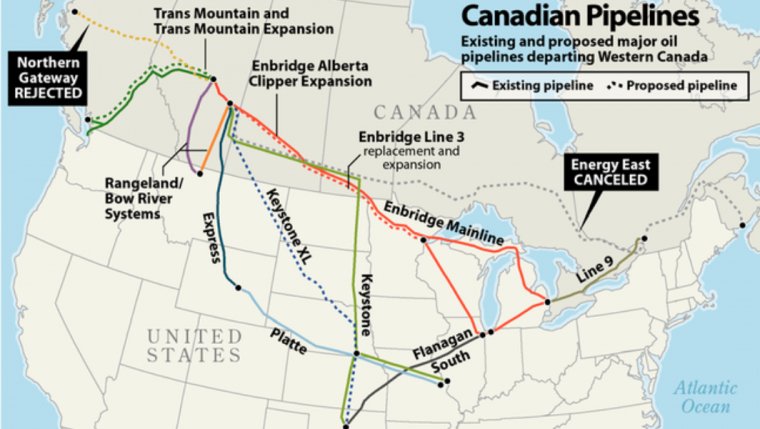 If you saw an opportunity to solve our fiscal problems, help our indigenous and northern communities find a future economy, and cement our alliance with the west by fully utilizing our northern coast and our hydro resources, would you take it?

We can build a pipeline from Manitoba’s oil patch, following the railroad right of way, to Hudson Bay in the north. Alternatively, the line could simply follow a straight line from Alberta, across Saskatchewan, and north to the Bay – in either case, it is “downhill all the way”, as they say, and a lot less invasive of the environment than a Pacific coast route would be.

Manitoba is not a crude-oil-carrying-pipeline virgin. We already host pipeline carrying crude through Manitoba. Presented as an expansion to an existing line, construction started in 2017 and will be completed this year. This pipeline will double the Enbridge capacity to carry heavy, medium and light crude from Hardisty, Alberta, through the oil patch and across much of southern Manitoba, then south to market in Wisconsin. The old line, constructed between 1962 and 1963, carried 390,000 barrels a day. The new pipeline will have a capacity of up to 800,000 barrels a day.

While a northern pipeline would not be a first for our province, it could be a much bigger contributor to our economy, especially if we can do a reciprocal deal with Alberta to extend our hydro lines westward to serve the needs of their oil patch. Currently, 89 per cent of Alberta power comes from burning coal (50 percent) and natural gas (39 percent). Extracting and liquefying oil from the tar sands uses vast quantities of electricity. A Manitoba-Alberta hydro-pipeline agreement would stimulate new roads, now industry, innovation and a completely new day for our province.

Any such deal needs to ensure that our indigenous and northern communities are part of the prosperity. One way to guarantee this is by negotiating a royalty on the product passing through First Nations lands. I have long supported the notion of paying royalties to First Nations to ensure that they benefit from the development of the land’s resources. It makes much more sense than demeaning welfare payments and provides a new and healthy autonomy that respects self-governance.

I am not the first to promote this idea. Many articles have been written about a northern pipeline which has been proposed by knowledgeable people. All the stats point to moving oil through Hudson Bay as a viable alternative to the West Coast. We could be delivering our oil to eastern Canadian markets by travelling through our own waters to the big refinery in New Brunswick. But it also happens that such a route would give efficient access to European markets, adding just one day to the journey. What a game changer for Canada and for Manitoba.

A the same time, new technology that would change liquid crude into solids is in development on a number of different fronts, including by CN Rail, Calgary’s Schulich School of Engineering and Calgary Bitcrude. Indeed, CN is building a $50 million pilot plant that will produce “hockey pucks” equivalent to 10,000 barrels a day as a prelude up to building a plant capable of producing five times that. Alberta is buying rail cars to haul the stuff. Instead of pucks or little balls, Bitcrude is developing pallets of oil that can be shipped flat. All of these innovations take about the same amount of energy to transform to liquid oil as did adding diluents to liquefy bitumen for pipeline transport.

While solidifying oil mitigates the chance of a spill, the amount that can be produced and transported is very small compared to pipeline flow. In November 2018, according to the National Energy Board, rail moved about 330,000 barrels of oil a day, more than triple what rail was moving in 2016, but compare that with the daily flow just through Enbridge 3, which is 2.5 times higher.

Still, rail does present an alternative, and the Hudson Bay Railway is under scrutiny as an alternative route. Given that the AGT Fairfax railway deal, known now under the name Arctic Gateway Group, includes “partnerships” with 20 northern indigenous and other communities, it is not a big stretch to imagine solid oil being hauled north in Rachel Notley’s rail cars in the near future. Indeed, there are indications that preparations are underway to make this a reality, including upgrading the Thompson airport, not just to build a new terminal but also to improve the infrastructure to enable it to take larger planes. Shipping oil by rail to the north would have to include some upgrading of the railway line, but pelletized oil can be moved in much lighter cars than the tankers with less wear on the railway.

It also must be remembered that the AGT Fairfax deal includes the Churchill Marine Tank Farm which is also being upgraded, although without a stated end purpose that I can find.

Finally, there is the big question of the fundamentalist environmentalists who callously use indigenous people to support their mania. They inflame communities with fear and ignore the economic value that can accrue to local economies. Yes there have been spills over the history of oil pipeline use, but consider that 99.9999 percent of oil flows without incident and you get an idea of how remote this is. As well, new technology in pipeline design includes sensors embedded in a double skin and segmented construction. If the line is punctured, this is readily detected and the spill quickly contained, preventing the major spills of the past.

I am a fan and supporter of electrification and other alternative forms of energy, but the truth is that fossil fuels will take a long time to phase out of service – perhaps to the end of this century. Meanwhile, Manitoba can be using its advantage as a seaport province in developing its North wherein lay many mineral resources to assist in the electrification industry.

We need to act like grownups, assess the risks, and make decisions about our future that will lay the foundation for prosperity. Our province was built on a legacy of courage and enterprise and it’s time we embraced this again for our future.