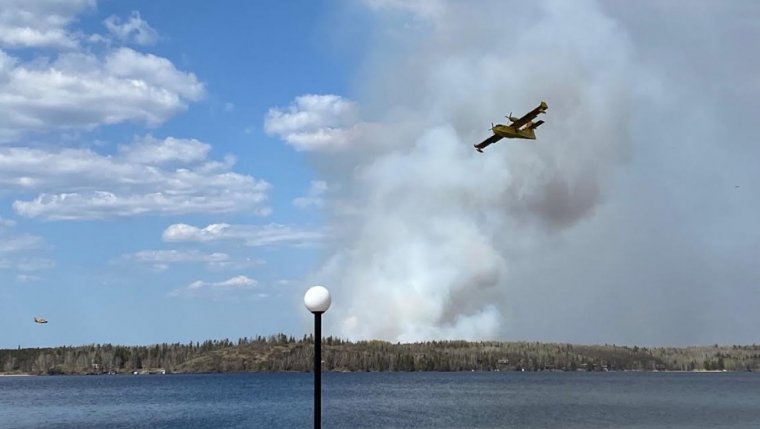 WINNIPEG - The Manitoba government says a new fire in the Whiteshell area has grown by 70 hectares in the span of several hours. The province is asking everyone to avoid the Toniata area, east of the Falcon Beach town site, for their safety to give crews room to work.

Personnel from Ontario are assisting the Southeast Whiteshell Fire Department as they battle what is now reported to be an 80-hectare blaze. The province says a number of structures, including around six trailers and RVs in a storage facility, have already been damaged by the rapidly-spreading flames.

Officials say the fire was reported just after 3 pm on Wednesday, and the Ministry of Natural Resources and Forestry says three water bombers have been called in to provide aerial support in the region.

MB Wildfire Service is asking the public to avoid the south Whiteshell, specifically around Toniata at this time. Crews are battling a fire and need to keep roads clear and people safe. Fire risk is high in MB, please be cautious and help prevent fires. https://t.co/5vJ6dIUoIO pic.twitter.com/4bvInsL3ac

Meanwhile, a wildfire in the RM of Piney measures around 1,900 hectares, as a drought and dangerously dry conditions allow fires to get quickly get out of control across the province. Conditions are so dry that the Steinbach Fire Department says it had to put out a fire along a median on Main St after what may have been sparked by a tossed cigarette butt.

Officials with Environment Canada suspect Manitoba’s wildfire situation could become Canada’s worst weather disaster of 2021, and burn and travel restrictions are in effect across much of the province, including all provincial parks south of the 53rd parallel.

A map of current municipal burn conditions is available on the province’s website.

Toniata is around an hour and 40 minutes east of Winnipeg, 12 minutes from the Ontario border.