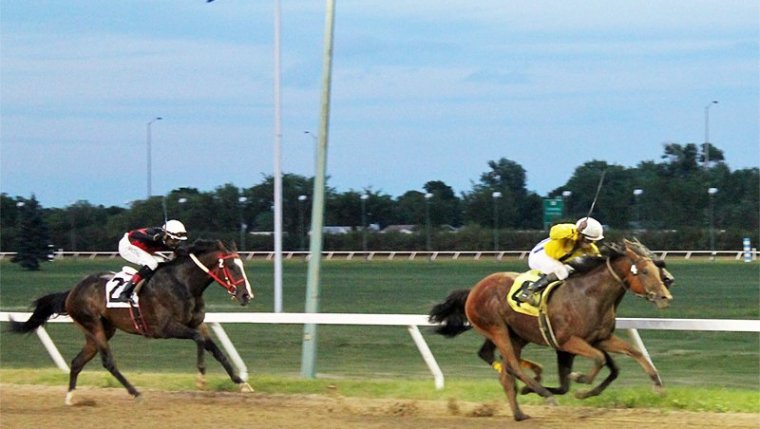 It was one of the great races of the summer, but in the end, the Manitoba Mile belonged to Stanley Chadee Jr. and Media Melee.

Last Saturday night, it was the 59th running of the $27,500 Manitoba Mile for three-year-olds and upward and at the start of the race, Media Melee was anything but a favorite of the local punters. Going off at 7-1, he was certainly not up there with pre-race favorite and 2017 Manitoba Derby winner Plentiful or last year’s CTHS Sales Stakes winner Langara.

And at the three-quarter pole, Media Melee had fallen to fourth and appeared to be languishing. But that’s when Chadee Jr. asked for a little extra and got it. After a bump with Witt’sdollarnight – a bump that resulted in an objection and a long wait after the race for a steward’s decision -- Media Melee rallied up the rail and passed Plentiful, winning by a neck.

It has been a tremendous summer of stakes races at the Downs and the next one goes this Wednesday night as the $27,500 Winnipeg Sun Stakes for older fillies and mares goes to post. However, this could be interesting. It’s currently a four-horse race with C.J.’s Flair, Amaretto, Tadaa and, you guessed it, Escape Clause. It will be interesting to see how many of these mares with challenge the Super Horse come Wednesday night.

This will be the final night of Wednesday racing until Aug. 15. There is also racing on both Friday and Saturday nights this weekend and, of course, on Fridays, Saturdays and Sundays, the free VLT tournaments continue, starting at 8 p.m. each night. You can get into the draw for 10 chances to win $20 in free VLT spins. The top winner from each night participates in a month-end finale for more spins and $250 in prize money.

And don’t forget, we’re less than two weeks away from Manitoba Derby Weekend. The Manitoba Oaks goes to post on Friday, Aug. 3 while the Derby thrills racing fans on Monday, Aug. 6.