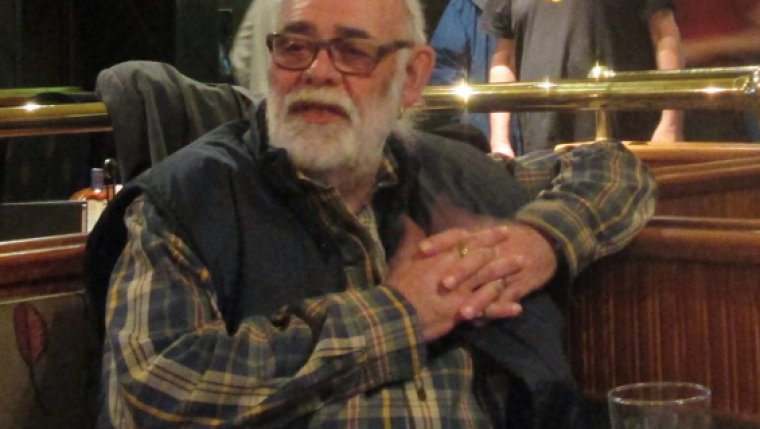 A tremendous outpouring of affection and respect flooded online feeds this weekend after the passing of Marvin Terhoch, Z'L", a beloved figure in Winnipeg's arts, music and broadcast community. Marv left us on Saturday, January 19th, after a rough few months.

With a commanding presence and a gentle hippie-era philosophical style, Marv's legacy was carved across the country during his tenure as head of CBC-TV Variety starting in the 1970's, then as head of CBC Manitoba and Executive Producer of the CBWT flagship dinnertime news program 24 Hours, starting in June 1981. 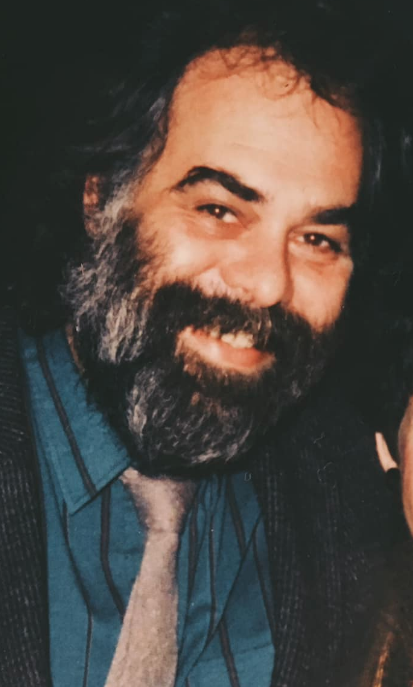 His work with CBC, the Folk Festival, and innumerable other events brought endless memories for hundreds of thousands of attendees and viewers, and boundless exposure for performers and broadcasters like Tom Jackson, Peter Paul Van Camp, Fred Penner, Len Udow and Don Marks. His leadership was exemplified by decades of volunteering, from being on the founding board of the International Children's Festival in 1983 to serving as board president of the Manitoba Association of Food Banks in 2017.

Singer/songwriter Graham Shaw described Marv as "both a patron and champion of the musical arts, made through his hard work and commitment, a whole lotta things happen for us raggedy ass Winnipeg and Manitoba musicians. Through CBC television, productions, various festivals or events like the Bill Merritt farethewell bop at the Norwood Hotel..." His photo captured Marv after the event, looking content after honouring his friend with an unmatched musical gathering. 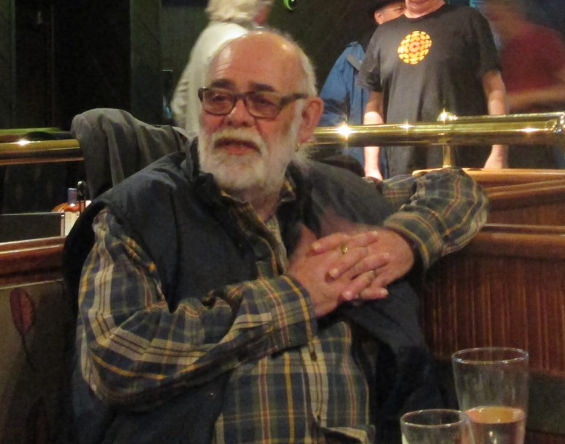 His cousin, Carmen Wayborn-Smith wrote, " Whenever I talked to him he was so genuine, made you feel like the only person in the room. He had so much warmth and light inside of him." And that was Marv to a T.

Marv was a guiding light for me starting in high school because of his personal relationship with my family. His mother's brother Abie Rosenberg and wife Pearl were best man and maid of honour for my parents wedding and Marv was at their wedding.They were our Uncle Abie and Auntie Pearl too, the 4 Rosenberg daughters our first cousins too, the only not-blood-related people so designated in our childhood.

Marv's ascension in the world of television production was a source of pride in the Jewish community, and when the end of high school lurked I was re-introduced to him. He treated me to lunches and sage advice about the TV and radio business at the Union Centre and a beer or two in the notorious Mall Hotel, where many CBC offices were located above the bus station.

A lot of people thought I was his nephew or cousin and accordingly, security ("are you Little Marvin or is he Big Martin?") gave me a lot of leeway to wander thru the CBC building on Portage and trailer on Young Street for years. Personalities like 24 Hours host John Harvard, new anchors Bill Guest, Garth Dawley and Jack Turnbull, weather forecasters Murray Parker and Arvel Gray, sportscasters Don Wittman and Bob Picken and Scott Oake, all tolerated my inquisitive nature and interest in news, sports and investigative journalism.

When my father, at age 44, died of pancreatic cancer, Marv consoled me, guided me, and gave teenage me a huge opportunity to write a pitch for a TV series and submit a spec comedy script typed by my mother about a basketball team, (which, he pronounced with a chuckle, "had its moments but you have a lot to learn, Martin. ").

She had the foresight to take a photocopy of that cheque, for the princely sum of one week's rate under the ACTRA contract, $224. 20, dated 40 years ago this week. It hangs immediately above my desk and has been on display wherever I have hung my shingle ever since. 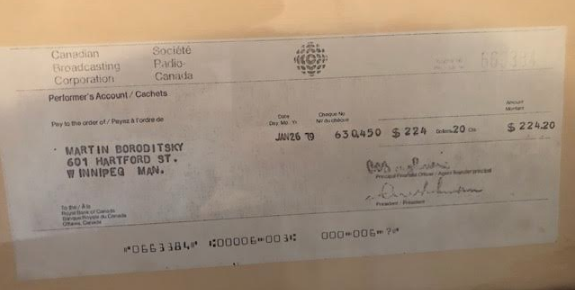 When my firstborn arrived, Marv and his wife Sherrin invited my wife and I to bring our son to their home in Lockport. My son, by some twist of fate, was born on January 19th, the same birthdate as my deceased father. On that same date, 38 years later, Marvin left us.

In the 4 decades since my first paid comedy writing gig , Marv was always interested in my radio, TV and writing careers, my advocacy for worthy causes and issues, and assorted adventures in wrestling. He was always on my side no matter how off-beat my path.

About 5 years ago I had my own midlife health scare after the discovery of a possible pancreatic lesion, and when he found out Marv became a calming voice, who steered me through my panic and fears until the results proved negative. Every year on my birthday, he messaged me with hopes and well-wishes that warmed my heart. 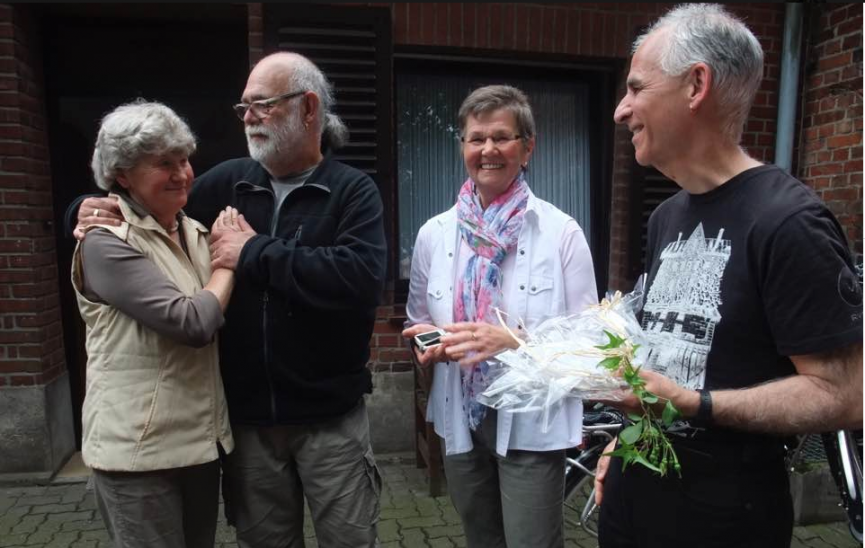 The depth of his caring soul was in full force in 2017. Marv (left) and his brother Len (right) made an emotional trip to Germany to meet the chilldren of the family who hid his father Kurt and the rest of their family in 1939-40 and helped them escape the Holocaust to Canada. He documented the journey and his words and photos touched everyone who knew him.

And in this tribute posted online by Carole Barbeau, his trademark compassion and humour left another indelible memory that year:

"You were such a dear, loyal friend to our brother Bruce Rathbone who died in 2017. Your incredible mind delivered a brilliant, honest, hilarious tribute to everything Bruce was at his Celebration of Life. . He held you in very high esteem, a most loyal friend to him, and we are grateful to have video of your completely entertaining words." 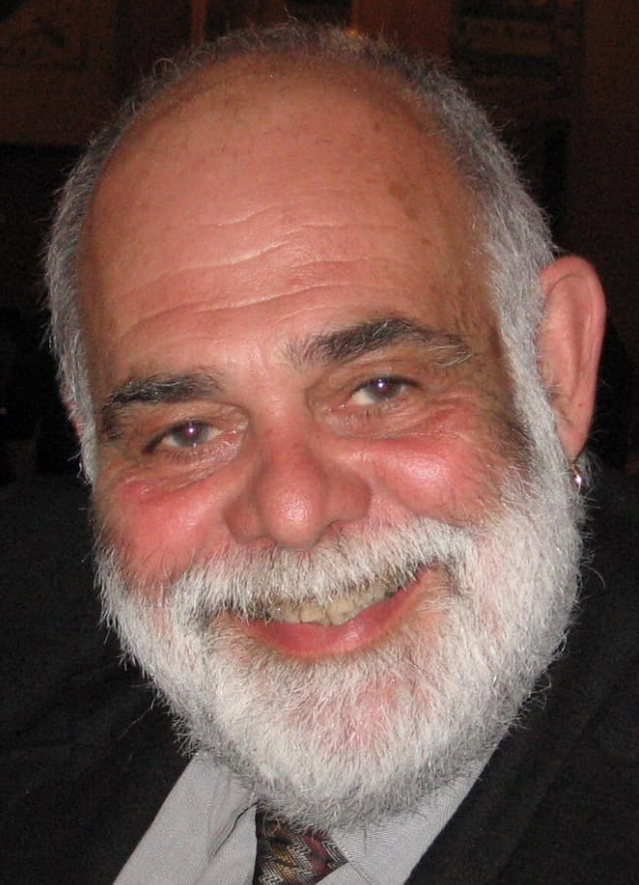 His family was by his side, deeply engaged in his medical treatment and daily care, until his final day at home bathed in sunshine and their eternal love. A Celebration of Life is planned for next weekend, details to be announced. May his memory be a blessing.

Correction: The quote below that was attributed to a "long-time friend" should be credited to his cousin Carmel Wayborn-Smith. It has been corrected in the article.

Another longtime friend wrote, "Whenever I talked to him he was so genuine, made you feel like the only person in the room. He had so much warmth and light inside of him."