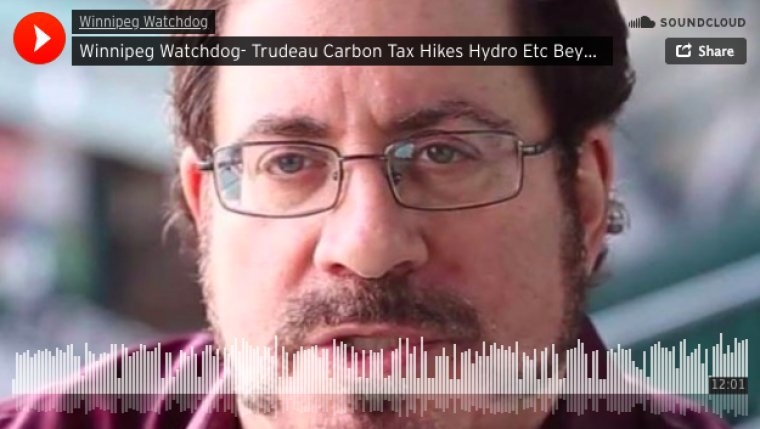 WINNIPEG - How many ways will the Trudeau government's Carbon Tax to save the world bleed Manitoba taxpayers dry, far beyond the mathematically dubious "rebates"?

In this podcast I count a few of the ways.

The announcement that the Carbon Tax soon to come will, in its first year, add $88 to an "average household" Hydro bill, spurred a lot of calculations online. One came from the Feds themselves, who "estimated that this year the average Manitoba household will pay $232 in carbon taxes ( ie $88 on Hydro, $144 on other bills) but receive $336 in rebates. By 2022, under the escalating tax, the average household will pay $547, but receive $797."

It is noted, those hiked costs are in POST-TAX dollars. The estimates seems to be

of only the Carbon Tax people will directly have to pay, and doesn't even consider how suppliers will themselves, have to bump prices to consumers to pay their own Carbon Tax bills incurred during production and delivery.

Another issue was the cost to publicly funded facilities like hospitals and schools, and where that money was supposed to come from. (Hint: what's in YOUR wallet.)

There was an extensive Twitter discussion involving myself and some pretty smart people about how school buildings might be converted to heat the property without using fuels, that seems to have some reasonable precedent - but again, how would it be paid.

Considering a huge percentage of the population is within $200 a week of being insolvent, those on the public payroll running this scam seem oblivious to the impact of their Carbon Tax on the folks expected to cough up. But after all, the last thing *those* people don't have, is their own money to spend - supplied by, of course, taxpayers seen as cash cows.