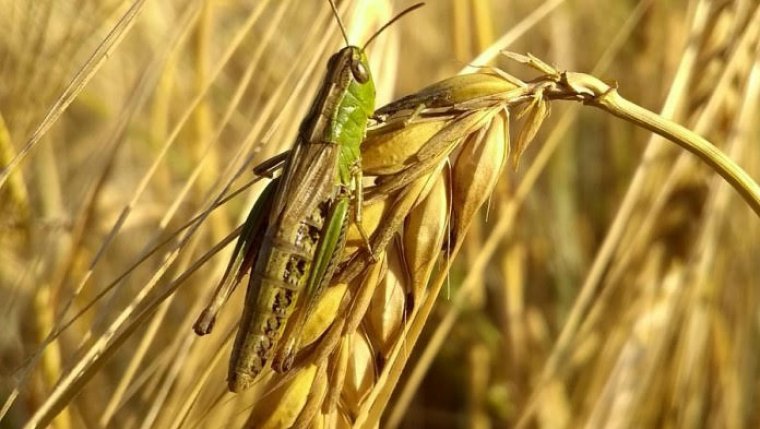 WINNIPEG - Experts are weighing in on a grasshopper plague that coincides with severe drought conditions, both seemingly of biblical proportions.

For weeks, farmers across southern Manitoba, as well as producers in Alberta and Saskatchewan, have reported seeing larger numbers of grasshoppers than normal infesting their crops. It turns out the numbers haven’t been this high in almost two decades.

University of Lethbridge agriculture and entomology professor Dan Johnson says the heat wave seen in much of western Canada earlier this year created conditions in which the insects thrive. Grasshoppers move more quickly and eat more in hot weather. Although Manitoba is home to around 90 different grasshopper species, only five are considered pest grasshoppers. One of those species is the two-striped grasshopper, which enjoys crops like canola and cereal grains like those common here.

But it's not just grain sold to humans that the insects are going after. Livestock producers are concerned about the pastures they send their cattle to graze in. Less food available at home thanks to the chewing critters means producers have needed to buy expensive hay to feed their livestock.

Keystone Agricultural Producers of Manitoba, an advocacy group representing more than 4,000 members in the sector, says the magnitude of the insect population is in some ways causing more damage to the livelihood of its members than the drought itself.

Experts say they’re worried that if warm weather continues into the fall and returns next summer, the grasshopper problem may end up getting even worse. Johnson says there have been times when vehicles would lose control driving down the road due to the volume of insects hopping across the pavement.