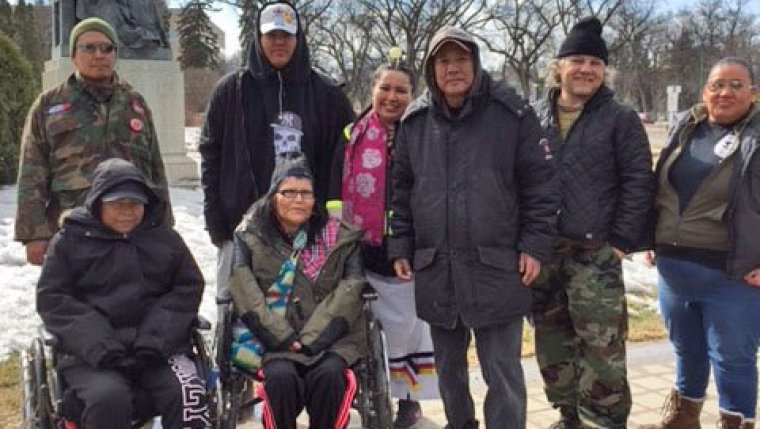 GATINEAU, Que. — An Indigenous woman who led a lengthy march in northern Manitoba to draw awareness to the scourge of crystal meth in her community tearfully confronted Indigenous Services Minister Jane Philpott Wednesday, asking for help.

During a question and answer period following an address by Philpott to the Assembly of First Nations, Wood approached the microphone, trembling with nerves and emotion.

As she struggled to find her voice, chiefs and elders in the room began to surround her, placing their hands on her shoulders to signal their support.

Wood told Philpott about the treacherous march she and others embarked upon last month on ice−covered roads and in biting winter winds, without the benefit of financial support.

They endured all this as a desperate attempt to draw attention to what they say is a crisis of abuse and addiction to crystal meth in her Island Lake First Nations community.

"We were walking for our children and our youth... we’ve walked over 2,000 kilometres already," she said, adding the group has been sleeping on gym floors with nothing but water and granola bars to keep them going.

Looking to Philpott, Wood made an emotional plea for help. As she did, the hundreds of delegates at the assembly rose to their feet in a show of support.

"Standing here today, we ask for help to bring awareness of this drug that’s killing our people, for something to be done."

The room erupted in thunderous applause.

Philpott brushed tears from her eyes as she expressed her commitment to trying to tackle the root causes of addiction among First Nations communities.

"I know there are people dying every single day as a result of drug use," she said. "The real root cause is not the drugs, it’s the pain — the deep. deep psychological pain that is in your communities and in your families and individuals."

She told Wood she would speak privately with her to find a way to support her Manitoba community.