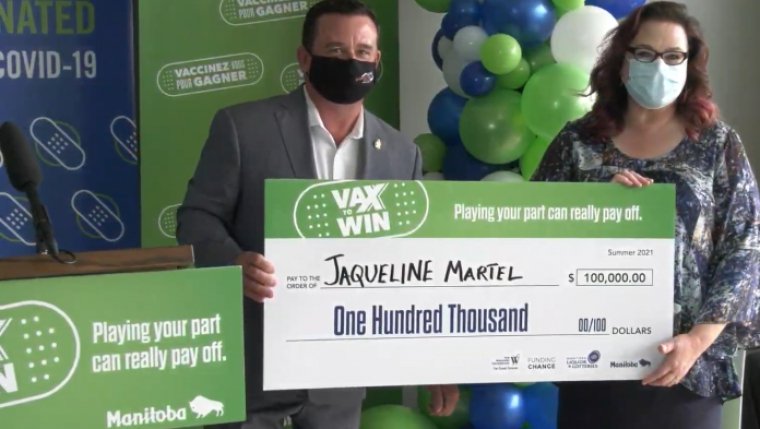 Three people in the Winnipeg Regional Health Authority, and one in each of Manitoba’s four other health regions, are $100,000 richer after hitting it big just for rolling up their sleeves.

- Kerry Maskiew from from WRHA;

- John Lyons from the Prairie Mountain Health region; and

Twenty Manitoba youth 12 to 17 years of age will also look forward to graduating with $25,000 scholarships.

Crown Services Minister Jeff Wharton says he’s grateful to the hundreds of thousands of Manitobans who have been vaccinated against COVID-19 so far. “I would like to congratulate not only the winners, but everyone who has been immunized,” Wharton says. “You have helped protect yourself, your loved ones, and our province.”

People who got their first COVID-19 vaccine by August 2 got automatically entered into the draw, and the winners were contacted by Manitoba Health prior to the announcement. Another draw will be made for Manitobans who get their second dose by September 6.

Deputy Chief Public Health Officer Dr. Jazz Atwal says evidence in both local and national data on severe outcomes due to COVID-19 indicates that what’s left of the third wave in Manitoba is "a pandemic of the unvaccinated."