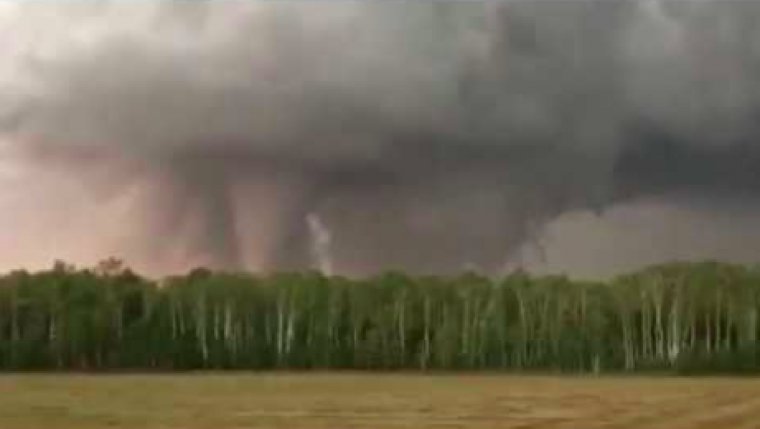 ALONSA, Man. — An Environment and Climate Change Canada meteorologist says a tornado that killed a man in Manitoba may have had similar destructive power as the deadly twister that struck Edmonton more than 30 years ago.

Natalie Hasell, a warning preparedness meteorologist with the agency, said the twister that hit the area around Alonsa on Friday night reached an EF4 on the Enhanced Fujita Scale. The scale measures storms on the level of destruction that investigators note, and an EF4 means winds speeds are believed to have reached between 270 and 310 kilometres per hour.

"One of the houses that we saw was wiped clean off its foundation," Hasell said about the tornado that happened about 165 kilometres northwest of Winnipeg.

"Cabins were destroyed. All that was left of them were empty spaces on the ground."

Hasell said many of the trailers in a campground couldn’t even be found, and some presumably ended up in nearby Lake Manitoba. Trucks were lifted off the ground and rolled, and a field that had 80 bales of freshly cut hay had only five bales left on it, with many of them being blown to the beach.

RCMP say a 77−year−old man, who friends say was a retired schoolteacher and farmer, was found outside his wrecked home near the community. No other injuries have been reported.

The Edmonton tornado that killed 27 people in 1987 was considered an F4, measured on an older scale that estimated that winds would need to be between 330 to 410 km/h to cause the damage that was observed.

However, Hasell explained that the new scale estimates similar damage to be possible at lower wind speeds. She said that while the Alonsa twister is estimated to have been on the low end of an EF4 with wind speeds between 270 and 280 km/h, it produced similar sorts of destruction observed in Edmonton.

"It’s quite possible that stronger winds were occurring, but we have no way of measuring that. We don’t have wind vanes everywhere or anemometers everywhere so we look at the damage," she explained, adding it’s possible EF4−strength tornadoes occur without ever being recorded because they occur in areas without buildings, so they don’t cause damage.

Hasell said most of the people who investigators spoke with did not receive a tornado warning on their cellular phones that was issued before the twister struck.

Residents in the area have said they have been experiencing poor cellphone service for the past two months.

Michelle Gazze, a spokeswoman Bell MTS, explained in an email that wireless public alerts can only be received on LTE devices when a phone is connected to an LTE network. She said that some communities in that part of the province are primarily served by HSPA networks.

But the Reeve of the Rural Municipality of Alonsa, Stan Asham, said the poor cell service also made it challenging for officials to respond to the twister’s aftermath.

Dean Capp, a councillor with the municipality who is also a firefighter, said some firefighters never received the callout about the emergency on their cellphones. Fortunately, he said, those firefighters were able to be reached on landlines.

Capp also said the poor cellular service made it hard for some people to call for help, and made it harder for firefighters and paramedics to communicate.

"You revert back to the old ways — land lines, two−way communication," Capp said.

Gazze suggested the problems could be due to a recent LTE upgrade in the region.

"While service in this area of the province has been greatly enhanced overall, some small pockets where coverage was already limited may have seen reduced coverage," she wrote.

—By Rob Drinkwater in Edmonton