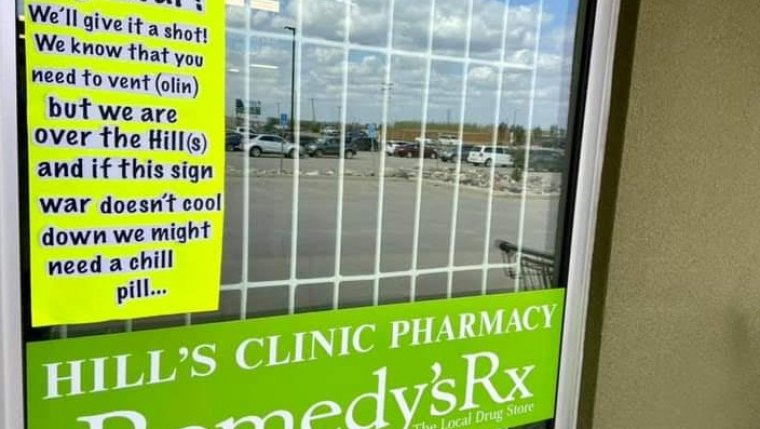 WINNIPEG - Business leaders in a Manitoba community continue to battle for billboard supremacy this weekend, but, rather than a sign of the times, this fight is a friendly one.

Waged for more than a week now, the Great Portage la Prairie Sign War was triggered when a customer of Styled With Meraki on Saskatchewan Ave. W. showed staff a few sign war photos from other provinces. The owners had already been trying to figure out what message to put on their sign to lift spirits in the neighbourhood, so they were all over the idea. Knowing the neighbouring business would gladly return fire, that was all the hair salon needed to send a message and strike a playful blow on Tornados Restaurant and Lounge, directly across the street.

As had been hoped, the visual volley quickly went viral, and a lot more businesses have gotten involved in the healthy rivalry since then - seemingly the whole city, from car dealerships to the golf course; coffee shops to the animal hospital ("We shih tzu not, we aren't kitten around." Even a martial arts instructor's fighting phraseology has kicked into high gear ("I can't take taekwondo seriously - I just do it for kicks."). Business owners there say it's done a lot of good not only as a much-needed morale boost but also as a way to build relationships.

Now rapidly spreading across Canada, the sign war phenomenon began in the small town of Christiansburg, Virginia on April 16, when a music store challenged a shoe shop to the novel battle plan, to which the footwear vendor responded a few days later, "Our shoe strings are stronger than your guitar strings."

Here's hoping the Fort La Reine Museum on the east end of P la P takes a jab at a business in Headingley so the scrappy signs spread into St. James. 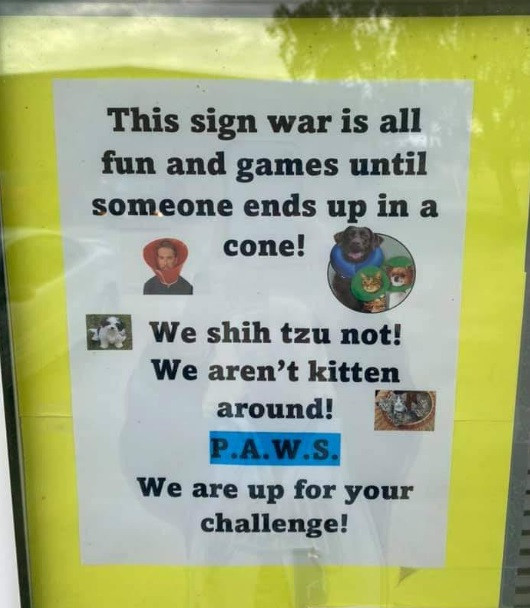